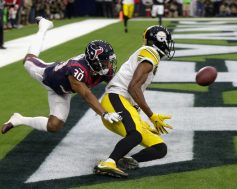 It would be more of the same in the second quarter for Pittsburgh.  Roosevelt Nix ... 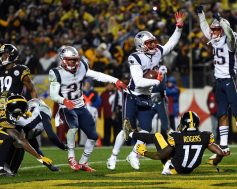 The theme of the Pittsburgh Steelers season has been narrow victories against inferior opponents.  Countless times, including the past month and a half, the Steelers have battled their way through mediocre play at times that have resulted in a last second field goal by Chris Boswell to snag a late victory.  That style of play led them to an 11-2 record and the top seed in the AFC as they entered yesterday’s game against the New England Patriots at Heinz Field.

Unfortunately, the Steelers couldn’t’ pull another victory out, as a late drive came up short, and the Patriots held on for a 27-24 win.

Antonio Brown left the game in the second quarter and did not return.  But despite losing his biggest weapon, Ben Roethlisberger was still effective against the New England defense, tossing... 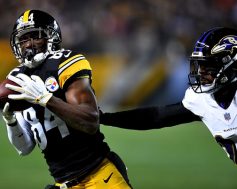 There is no explanation for how the Pittsburgh Steelers have managed to rack up an eight-game winning streak this year.  Each week they seem to be on the verge of defeat, only to grab on to victory in the final seconds.  Tonight’s game against the Baltimore Ravens was no different.  Games with these two teams are tense enough, but tonight is near the top of the list.

Pittsburgh was able to jump out to a 14-point lead and looked to be in control of the game.  Ben Roethlisberger, who would throw for 506 yards tonight, threw a 20yd touchdown pass to Le’Veon Bell for the first score.  Bell would then run for a 1yd touchdown for the second.  Baltimore would cut that lead in half on a touchdown pass from Joe Flacco to Chris Moore.

The man who should be team MVP this year, Chris Boswell 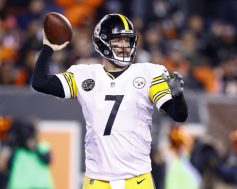 Tonight’s game between the Pittsburgh Steelers and Cincinnati Bengals had major playoff implications for both teams, and while it was a close game that went down to the wire, dirty plays and injuries once again took to the forefront in front of a national audience.

After falling behind by 17 points, the Steelers rallied in the second half to win 23-20.

Before the game could barely begin, the Steelers were dealt a major blow as Ryan Shazier went down with what appeared to be a serious injury.  There was no further word on the extent of the injury, but he was carted off the field and taken to a local hospital.

The Steelers got off to a sluggish start tonight on both sides of the ball and the Bengals took advantage of it.  A 35 yard field goal by Randy Bullock gave the Bengals an early 3-... 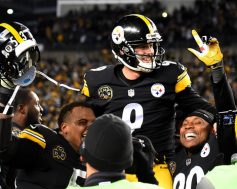 The fact that the Green Bay Packers are currently without Aaron Rodgers and Clay Matthews, along with owning a 5-5 record coming into Sunday night, may have given the Pittsburgh Steelers a false sense of relief.  Green Bay put up a fight all night long and it would take a last second field goal from Chris Boswell to secure a 31-28 Pittsburgh victory.

The Steelers drove the opening drive right down the field and capped it with a 1-yard touchdown pass from Ben Roethlisberger to Xavier Grimble.  A missed extra point would mean only a six-point lead for the black and gold.  The Packers would own the rest of the quarter with two touchdown drives.  The first came on a 39-yard touchdown pass from Brett Hundley to Randall Cobb.  Hundley would then connect with Jamaal Williams for a 54-yard to... 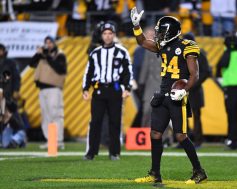 Despite a 7-2 record and occupying a comfortable lead in the AFC North division, the Pittsburgh Steelers have yet to click offensively.  Tonight, though, the two stars of their passing attack – Ben Roethlisberger and Antonio Brown – took over the game, connecting for three touchdowns as the Steelers beat the Tennessee Titans 40-17 at Heinz Field.

The Steelers marched down the field easily on their opening drive, highlighted by a 42 yard touchdown connection between Roethlisberger and Brown to make it an early 7-0 game.

The Titans, on the other hand, turned the ball over on their first possession, as Marcus Mariota overthrew a ball on third down, and Mike Hilton picked up his second interception of the season.  While the Titans’ defense kept the Steelers out of the end zone, a Chris... 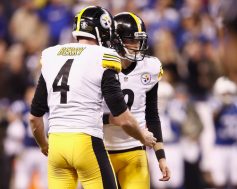 Winning ugly has become a theme for the Pittsburgh Steelers during the Mike Tomlin era.  For whatever reason, Pittsburgh has played down to inferior opponents while he has been the head coach.  With the talent on offense, and a highly ranked defense, the Steelers on paper should have had no problem with the Indianapolis Colts today.  However, the games are not played on paper and Indianapolis gave Pittsburgh all they could handle, before the Steelers went on to a 20-17 victory.

After a scoreless first quarter, the Colts would jump out to a 7-0 lead early in the second quarter on a 60-yard touchdown pass from Jacoby Brissett to Donte Moncrief.  Nine minutes later Adam Vinatieri would boot a 48-yard field goal to increase their lead to ten.  Chris Boswell would finally put the Steelers ... 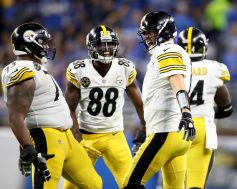 Tonight’s game between the Pittsburgh Steelers and Detroit Lions had all the makings of what could have been an offensive shootout.  But these two high-powered offenses struggled out of the gate, and long drives sputtered down the stretch, turning this into a field goal controlled game.  In the end, though, the Steelers made the biggest plays of the night, leading them to a 20-15 victory.

Ben Roethlisberger had 313 yards with a touchdown and interception, while Matthew Stafford threw for 423 yards with zero touchdowns and zero interceptions.  JuJu Smith-Schuster had 193 yards receiving and a touchdown, Antonio Brown had 70 yards, and Le’Veon Bell had 76 yards on the ground.

The first half of this game featured both offenses moving up and down the field, but neither team could finish... 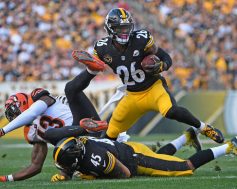 The Pittsburgh Steelers were back at Heinz Field today to host their division rival, the Cincinnati Bengals.  This has been a hard-hitting series over the past couple of years, and most felt that is how it would be today.  These teams would go back and forth throughout the first half until Pittsburgh kicked two field goals prior to halftime.  They would add to that lead during the second half on their way to their fifth victory of the season.

Pittsburgh would take the opening drive down the field and cap it off with a seven-yard touchdown pass from Ben Roethlisberger to Antonio Brown.  Brown would have one of his least productive days of the year with four catches for 65 yards.  Cincinnati would answer when Andy Dalton connected with a six-yard touchdown pass to tie the game at seven. 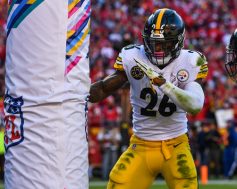 Coming off one of the more disappointing performances in recent memory, the Pittsburgh Steelers hit the field on Sunday for their toughest opponent of the season thus far.  The Kansas City Chiefs entered play with a perfect 5-0 record, and the Steelers were looking to rebound off an embarrassing loss to the Jacksonville Jaguars last week.

On Sunday, the Steelers got back to what makes them potentially one of the best teams in the NFL, utilizing the run to set up play action, and they outlasted a late Chiefs comeback to hold on for a 19-13 victory.

Le’Veon Bell dominated this game, just as he did in the Steelers’ playoff victory at Arrowhead Stadium last year.  Bell rushed for 179 yards on 32 carries and one touchdown.  Ben Roethlisberger, while still not as sharp as we are accustome...