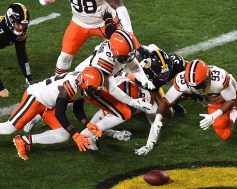 For the first time in three years the Pittsburgh Steelers were back in the playoffs.  Their opponent, the Cleveland Browns, had waited eighteen years to return to the postseason.  No one who has watched football this year, or the prior 101 seasons of the NFL, could have seen this game going the way it went.  Cleveland had many players and coaches out tonight due to COVID-19 protocols and had not practiced much all week.

Pittsburgh had to be feeling good about their chances tonight.  They were well rested, had players returning from the injury list, and looked good with their second-string team against the Browns just one week ago.  The Steelers practically handed Cleveland twenty-one points off of three first half turnovers, on their way to the Browns earning a 48-37 victory... 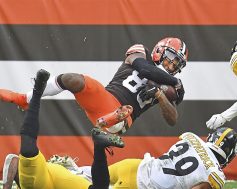 The Cleveland Browns had a simple path to the NFL playoffs when they took the field on Sunday against the Pittsburgh Steelers:  win and you’re in.  Both teams were missing some key players and both teams have had their seasons affected by the pandemic, as all teams have, but it all came down to the final 60 minutes of the regular season between these two AFC North opponents.

The Browns built a substantial lead, and held off a valiant Steelers’ comeback on their way to a 24-22 victory.

Baker Mayfield had 196 yards in the air and a touchdown, while adding 44 yards rushing, including a few crucial first down scampers in key moments.  Nick Chubb finished off his impressive season with 108 yards on 14 carries and a touchdown.