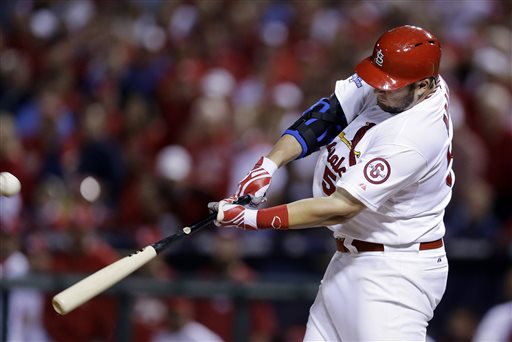 Today marked the start of a very important road trip for the Pittsburgh Pirates.  After completing an 8-2 home stand at PNC Park, the Bucs have put themselves right back in the race for, not only the Wild Card, but for the N.L. Central division.  The Pirates kicked off their seven game road trip tonight against Adam Wainwright and the St. Louis Cardinals at Busch Stadium.

Matt Adams hit a two-run walk off homerun off of Justin Wilson in the bottom of the ninth to propel the Cardinals to a 2-0 victory over the Pirates in the first of a four game series between the two division rivals.

Wainwright and Charlie Morton pitching shutout baseball tonight for their respective teams, but did so in different manners.  While the Cardinals’ ace had to battle some control problems and work himself out of jams nearly every inning, Morton was spot on, keeping the Cardinals’ hitters in check throughout his seven innings of work.  Ground Chuck gave up just one hit and two walks with five strikeouts in seven innings, lowering his ERA to 3.10 for the season.

The Pirates set up shop in the first two innings off Wainwright.  After getting out of a jam in the first inning, the Cardinals’ ace gave up a walk to Ike Davis and a single to Pedro Alvarez to lead off the second inning, putting runners on first and second with no outs.  But after Jordy Mercer grounded into a double play, Morton grounded out to end the threat.

The fourth inning set up similarly for the Bucs against Wainwright.  Neil Walker led off with a bloop single to center and Davis later hit a single, putting runners on first and third with only one out.  But after an Alvarez strikeout and Mercer popped out, Wainwright escaped another inning without surrendering a run.  That trend continued in the fifth inning.  After a two-out triple by Starling Marte, Andrew McCutchen grounded out to third to end the inning.

Cutch had another good opportunity in the seventh inning, but with runners on first and second and two outs, he popped out to shallow right to end the threat.  Notice a trend here?

Walker led off the eighth with a single, and later in the inning, Gaby Sanchez drew a walk to put runners on first and second with one out for Alvarez.  After the Bucs’ third baseman popped out, Mercer reached base on an error to load the bases for pinch-hitter Gregory Polanco, who struck out to strand three more runners.

This was a tough loss for the Pirates.  It became another wasted start by Morton, who pitched well enough to win easily.  The Bucs had plenty of opportunities to score off Wainwright and the bullpen, but couldn’t come through with that one big hit, and in the end, it cost them a victory.

The Pirates and Cardinals will face off again tomorrow night for the second game of the series at Busch Stadium.