After Series Victory Over The Phillies, Pirates Head Out West For Season’s First Road Trip 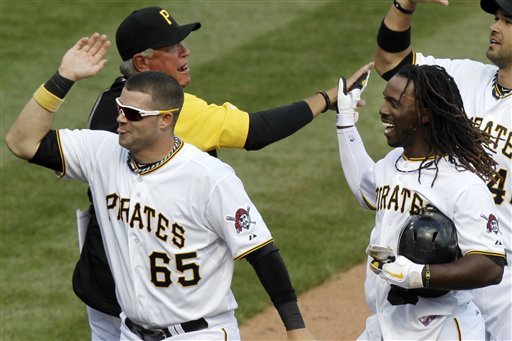 And that’s just the way they planned it!

The Pirates opened their 2012 regular season by winning two of three games against the Philadelphia Phillies at PNC Park over this past weekend.

Having faced some of the toughest pitching competition the National League has to offer, the Bucs’ hitters opposed the likes of Roy Halladay, Cliff Lee, and Vance Worley in consecutive games.  Having won the N.L. East in each of the last five years, the Phillies are once again viewed as the divisional favorites, and what a difficult task it was for the Pirates’ offense, which notably struggled last season, to begin their 2012 campaign.

We all know what happened.  After Alex Presley’s infield single won the game for the Bucs on Saturday night, Pedro Alvarez, Andrew McCutchen, and Casey McGehee led the offensive attack yesterday in full support of starter James McDonald.  The Pirates, for the second straight game, beat the Phillies in walk-off fashion.

Pedro Alvarez hit his first homerun of the season yesterday off Vance Worley.  Hopefully this will be the first of many for Pedro.

Then with two outs and the winning run 90 feet away, Andrew McCutchen walked to the plate in the bottom of the ninth inning.  On a 3-2 count, well, Cutch clinched the series victory.  Check out his post-game interview with reporters below, courtesy of Pittsburgh Sports Report:

The Pirates are out west for the rest of the week with big three game series against the Los Angeles Dodgers and San Francisco Giants.  Stay tuned to Fans From The Stands for recaps and reactions to all of the latest Bucco news.