Alvarez And Lincoln Lead Pirates To Victory Over Blue Jays 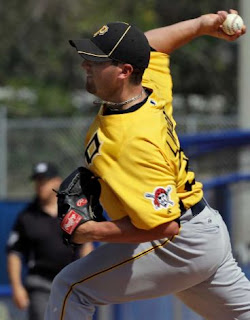 The Pirates were back on the diamond Thursday for a game against their neighbors from the north, the Toronto Blue Jays, in .  This would be the first of four spring training games for the Buccos against the Jays.  sent Charlie Morton to the hill to start the day, while started left-hander Brett Cecil.
Cecil began the game strong as he would strike out the first four batters he faced and didn’t allow a hit until the 3rd inning.  Expected to be the ace of the Blue Jays’ staff this season, Cecil proved his worthiness by throwing 36 out of his 60 pitches for strikes.
Charlie Morton’s day didn’t start off quite as well as his on-mound opponent’s, as he got himself in trouble in the game’s opening frame.  Former Bucco Rajai Davis scored on a single by another ex-Pirate Jose Bautista.
Morton settled down, though, retiring the next seven batters and finishing his three innings allowing one run, two hits, and one strikeout.  Brad Lincoln was next on the mound, pitching three innings while striking out one and not allowing a hit.
took the lead in the sixth off a Pedro Alvarez triple, scoring Jason Jaramillo and Andrew McCutchen.  The Pirates extended the lead when Dusty Brown hit an RBI single in the seventh inning.  would go on to win, 4-1.
With the win today the Buccos move their record to 4-3.  It was good to see quality pitching performances from Morton and Lincoln as they look to win the fifth spot in the rotation.  The Pirates will take on their cross-state rival Philadelphia Phillies in on Friday at 1:05pm.  Kevin Correia will make his second start of the spring, looking to improve upon his first time in a Pirates’ uniform.
And…
As Always…
Let’s Go Bucs!