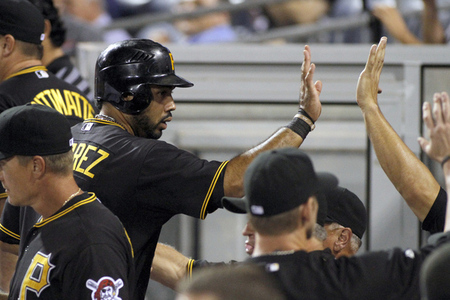 The Pirates entered tonight’s game against the Mets with a 75-78 record, needing to go 6-3 the rest of the way in order to avoid their 20th consecutive losing season.  Tonight, they took the first step in that process, scoring seven runs in the first two innings on their way to an 10-6 win over the Mets in the second game of the four-game set in New York.

Pittsburgh jumped on Mets’ starter Collin McHugh early and often tonight, including a three-run homerun by Pedro Alvarez in the first inning.  Josh Harrison added a two-run triple in the second inning, and after Garrett Jones reached on an error, allowing another run to score, McHugh was relieved of his duties.  All in all, the Pirates tagged him for seven runs on five hits in just over an inning of work.

Wandy Rodriguez didn’t start out much better tonight, giving up three runs in the first inning.  But after that, he was solid the rest of the way.  His final line read six innings pitched, three runs on four hits with two walks and three strikeouts.  Chris Resop gave up a trio of runs as well in the seventh inning, while Jason Grilli and Joel Hanrahan pitched scoreless eighth and ninth innings respectively.

The Pirates’ offense showed a lot of life tonight, scoring a total of ten runs on nine hits.  Garrett Jones reached base four times, including a two-run homerun in the ninth inning. Harrison added two hits, as did Alex Presley, while Andrew McCutchen added a double and two walks.

It was nice to see the Pirates play with a lead for a change.  There’s no denying that it’s been difficult to watch the Bucs play recently, so this was a nice change to see them get out in front early, and not blow the lead entirely.  Alvarez’s homerun in the first inning was his 30th of the season, a nice milestone for him.  McCutchen’s 1-3 performance keeps him in front of the Giants’ Buster Posey for now.  Unfortunately, with the team playing the way it has lately, all we, as fans, can lean on at this point are individual accomplishments.

With the victory, the Pirates even up the series at a game a piece with the Mets, with two more games remaining.  The Bucs will play their final two road games of the season tomorrow and Thursday before returning to PNC Park for the season’s final six games inPittsburgh.