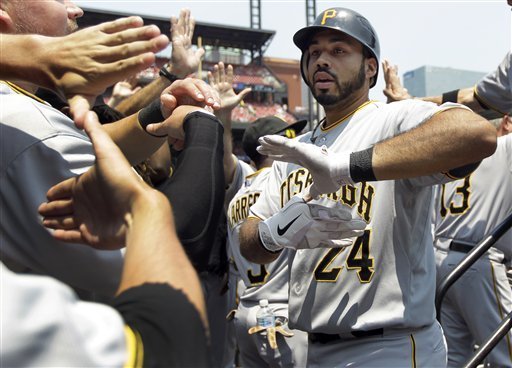 The Pirates entered this weekend’s series against the St. Louis Cardinals with a lot to prove.  Now, after this afternoon’s 7-3 victory at Busch Stadium, they are proving that they are a serious threat to the Cardinals, the Cincinnati Reds, and any other team in the N.L. Central division.  That is, the way they’re playing right now…

Pedro Alvarez hit a grand slam in the first inning off Cardinals’ starter Lance Lynn, and the home team never recovered.  After Lynn got the first two batters to ground out, Andrew McCutchen and Garrett Jones hit back-to-back singles, and Neil Walker drew a walk.  Alvarez put a 3-2 pitch into the seats over 430 feet away to give the Bucs an early 4-0 lead.

Walker’s RBI double and Clint Barmes’ fielder’s choice RBI ground out gave the Pirates two runs in the fifth inning, and Drew Sutton added an RBI in the ninth.  The Bucs have scored 21 runs in the series so far, and have the hottest hitting offense in the National League right now.  The team’s eight hits came from seven different players, while McCutchen was the only Bucco to tally a multi-hit game, bumping his average up to .346 for the season.

Jeff Karstens actually looked like himself out there this afternoon, keeping the Cardinals in check for a majority of the game, while managing the damage when he did get himself into jams.  He gave up two runs on four hits through seven innings, earning his first victory of the season.  Tony Watson and Jared Hughes finished up the final two innings for the Bucs, who never let the Cardinals get close down the stretch.

The Pirates are now seven games over .500 and are keeping pace with the division-leading Reds, who also won this afternoon over the San Francisco Giants.  They will now go for the series sweep tomorrow afternoon in what promises to be another hot afternoon at Busch Stadium.  Andrew McCutchen will likely be left out of the lineup after spraining his wrist today diving for a ball in the third inning.  X-rays did come back negative, but Clint Hurdle said he was leaning toward giving his star center fielder the day off.  Erik Bedard will be on the bump against Jake Westbrook for St. Louis.  First pitch is slated for 2:15pm.