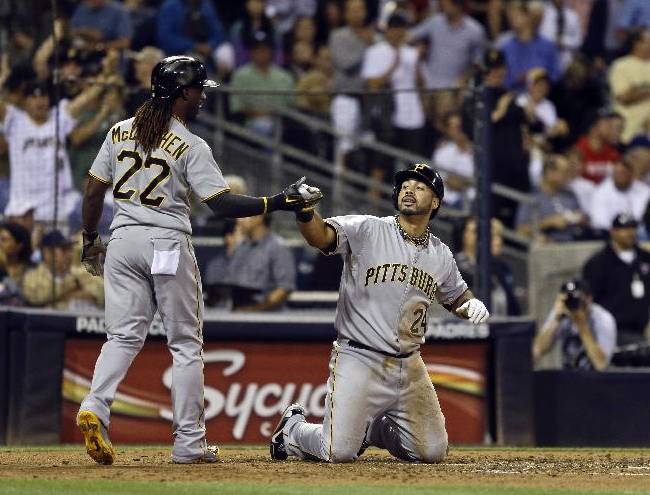 After yesterday’s 4-2 loss to the Arizona Diamondbacks in 16 innings, panic had begun to set in for fans of the Pittsburgh Pirates.  In the past two years, we’ve seen the team collapse after promising starts to the season.  Could this be the beginning of the end for the Bucs run at October?  Francisco Liriano emphatically rejected those thoughts with a marvelous start tonight at Petco Park, as the Pirates beat the San Diego Padres, 3-1 in the first of a three game series.

Liriano was brilliant tonight, giving up just four hits and walking two while striking out 13 batters in seven innings.  Further solidifying himself as the ace of the pitching staff, Francisco lowered his ERA to just 2.53 while helping the Bucs win their 73rd game of the season.

The Pirates took the lead in the fourth inning.  Andrew McCutchen led off with a seeing-eye single up the middle to set the table for the Bucs.  Pedro Alvarez smacked  single to right field, which quickly turned into much more as an error on Chris Denorfia allowed McCutchen and Pedro to come all the way home.

Liriano ran into a bit of trouble in the bottom of the fourth.  After a pair of two-out walks and a single, the bases were loaded for former Bucco Ronny Cedeno.  But as we have all seen far too often from Cedeno in previous years, he swung at the first pitch he saw, hitting a weak ground ball to Alvarez for the force out.

El Toro struck again in the sixth inning.  With two outs and no runners on, Alvarez belted his league-leading 31st homerun of the season to put the Pirates on top, 3-0.

The three-run output was more than enough for the Bucs’ pitching staff.  After Liriano’s seven shutout innings, Justin Wilson pitched a scoreless, hitless eighth inning. Mark Melancon came in and, despite giving up a rare earned run, set the Padres down to close out the game.

This was obviously a big win for the Pirates, who desperately needed to get off to a good start to what appears will be a very challenging west coast road trip.  The offense still isn’t delivering at all, managing only three runs, two of which were the result of a horrendous defensive blunder by the opposition.  But Liriano was magnificent again tonight, and that was difference in the ballgame tonight.

Even though the Padres are not a good team, they have always been a thorn in the side of the Buccos, so this was a great start to this series.

A.J. Burnett will take the mound for the Bucs tomorrow night in the second game of the series.  First pitch is scheduled for 10:10pm.