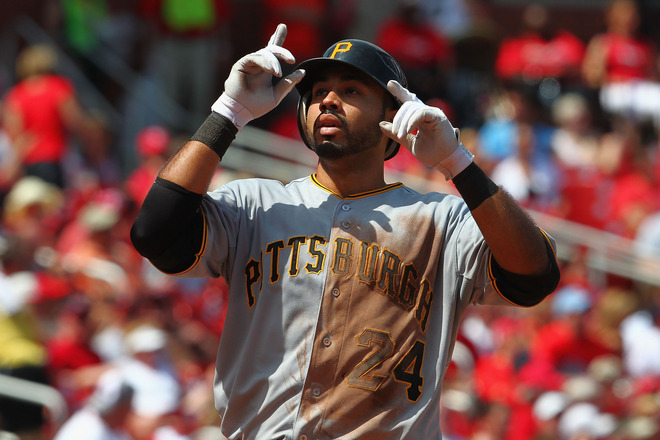 The Pirates have taken on a different identity the past couple days.  Up until Tuesday night, the Bucs were winning games primarily by out-pitching their opponents.  The offense was struggling, but the starters and relievers were holding opposing batters in check.

That all has changed in this series against the St. Louis Cardinals at Busch Stadium.  Coming into this afternoon’s series’ finale, the Cardinals had scored 22 runs in two games.  Starters Charlie Morton and A.J. Burnett struggled significantly, and it appeared just as the Pirates’ offense was waking up, the pitching was falling asleep.

Things couldn’t have started off much worse for the Bucs and starter Erik Bedard today either.  The Cardinals tagged Bedard for three doubles in the first inning by Rafael Furcal, David Freese, and Allen Craig respectively, and the Pirates found themselves trailing the Red Birds, 2-0.  He got himself into more trouble in the second inning after Clint Barmes’ throwing error to put a runner on second with no outs.

But Bedard squeaked through the second, keeping his team within a pair.  It was a struggle for Erik all afternoon, but through five innings of work, he gave up just the pair of runs on five hits, with two walks and an impressive eleven strikeouts.

After Jared Hughes pitched an easy sixth inning, Juan Cruz ran into trouble in the seventh.  After walking Furcal and John Jay, Freese smacked a single, loading the bases with two outs and Craig stepped to the plate.  Cruz got Craig to ground out to third, ending the threat.  Jason Grilli and Joel Hanrahan finished things up in the eighth and ninth, securing the Bucs the win and avoiding a series sweep.

From an offensive standpoint, the same trend continued that has been present since the series against the Atlanta Braves.  Pedro Alvarez and Jose Tabata led the attack with the bats this afternoon, as they’ve done consistently on this road trip.  Alvarez went 2-4 with a homerun, two RBI, and two runs scored.  Tabata, switching spots in the lineup with Alex Presley to bat leadoff, was 3-4 with a run scored and a stolen base.  Alvarez continued to be a monster at the plate, and his bat (and his confidence) is at an all time high right now.

Garrett Jones had two hits for the Bucs this afternoon, as did Clint Barmes, who added two RBI, including a big insurance run in the eighth inning on a double which scored Jones.  Presley and Neil Walker each added a hit as well.  Andrew McCutchen, who started after sitting out last night, left early after one at-bat due to a queasy stomach.

This was a huge victory for the Pirates this afternoon.  For a team like the Bucs, it is crucial that they stay away from losing streaks, and by salvaging this game today, they give themselves new life as they head into this extended home stand.  It is incredibly inspiring to see Alvarez swinging the bat the way he is, and the same can be said about Tabata.  After a day off yesterday and most of the day off today, Andrew McCutchen should be well-rested and back at it for this weekend’s series, provided he’s feeling better.  Could the offense be on the cusp of exploding?  We shall see.

After finishing with a 3-4 road trip against the Braves and Cardinals, the Bucs return home for nine straight games at PNC Park, beginning tomorrow night with the first of a three-game set against the Cincinnati Reds.