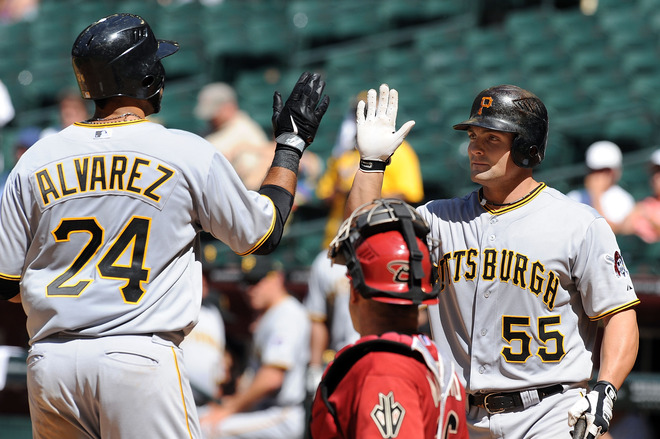 Wow, what a huge win today.  After dropping the first game of a three-game series against the Arizona Diamondbacks on Monday, the Pirates won two one-run games (imagine that) in the past two days, putting a strong finish on an otherwise dismal road trip.  The Bucs beat the Diamondbacks today at Chase Field, 2-1.

There’s no disputing the fact that the Pirates’ offense has been awful so far this season.  The past two games, however, they’ve actually looked like a respectable offensive team.  After tallying a total of 19 runs in the first 10 games of the season, they’ve scored 7 runs on 20 hits in the past two games.  It’s an extremely encouraging sign for this team, who, up until this point, has been carried by pitching efficiency.

Clint Barmes, Andrew McCutchen, and Neil Walker smacked back-to-back-to-back singles in the eighth inning, giving the Pirates the lead.  McCutchen led the Bucs with two more hits today, elevating his average to an even .400.  After a slow start, Walker has caught fire, returning to his RBI machine form of a year ago.  And we can’t forget Pedro Alvarez, who hammered a solo homerun in the seventh inning, tying the game at that point.  It was his second homerun of the year, and his second hit in general.  The average (.074) is still putrid, but we can only hope that this can get Pedro going.

The pitching was, once again, impressive for the Pirates, limited Arizonato just one run on six hits.  James McDonald got the start today, and, despite only throwing four innings, kept the Diamondbacks in check and worked his way through some tense early moments.

Brad Lincoln, who was recalled from the minors following news that Jeff Karstens was place on the disabled list, threw three scoreless innings today, giving up one hit and walked three while striking out four batters.  After Chris Resop and Tony Watson combined for a scoreless eighth inning, Juan Cruz came in and shut down the Diamondbacks to earn his second save of the season.

After losing five straight games to begin this west coast road trip, the Bucs have won three out of their last four games.  This was their second series victory of the season, and their first one the road.  More importantly, this makes the horrendous start to the road trip just a little easier to digest.  After all, this was recognized before the season began as one of the toughest April schedules in baseball.  They are now at 5-7 with six games coming up at home beginning on Friday, and hopefully this most recent series win can carry some momentum over to the upcoming homestand.

The Bucs have off tomorrow, and return to action this weekend against the St. Louis Cardinals.  Another huge series at PNC Park is in store for Pittsburgh baseball fans.