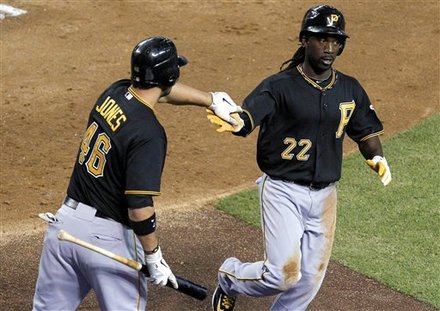 Thirteen may be an unlucky number for some, but with the way the Pittsburgh Pirates offense has strugled the early part of the season, thirteen hits felt like a blessing.  Those hits along with a solid bullpen outing carried the Buccos past the Arizona Diamondbacks 5-4.

The bullpen was stellar once again and was pressed into long relief tonight, as starter Jeff Karstens left the game after only one inning pitched with pain in his throwing shoulder.  Jared Hughes would pitch 2.2 innings allowing one run on three hits while striking out and walking two batters.  That effort would be followed up by Tony Watson working 2.1 innings and pitching flawlessly, striking out two batters and not allowing a hit.

After Watson came out Evan Meek stepped into what we hope is a familiar sight for Pirates fans this year, the seventh inning.  After some shakey pitching from Meek, tonight he looked like his old self breezing through the inning.  Jason Grilli came on for what all had hope would be seting up the closer, but Grilli would give up the game tying home run to John McDonald.

Hitting was huge for Pittsburghtonight.  Garrett Jones started the scoring with a RBI single to left that scored Andrew McCutchen.  After Arizona took a 3-1 lead in the third, Neil Walker would single home Cutch, and then be brought home on a Jones double.  The Buccos retook the lead in the sixth when G.I. Jones hit his second homer of the year, to right center field.

After Grilli gave up the game tying shot in the bottom part of the eighth, the Pirates battled back in the ninth.  With two outs, Alex Presley would hustle out an infield hit.  That would be followed up with Casey McGhee hitting a single up the middle.  McCutchen would strike again with a shallow fly ball to left that would score Presley.

With Joel Hanrahan out with a hamstring injury, Juan Cruz was brought in for the save situation and looked like a man who has done this a million times before.  Cruz set down the D-Backs 1-2-3 and earned their second win on the road this year.

Big win tonight for the Pirates, this game could have been downhill after losing the lead in the first and having Karstens leave the game.  The bullpen stepped up and finally the Buccos had some timely hits.  Was this a preview of things to come from the Pittsburghoffense? Only time will tell. They have another chance to beat Arizonain the rubber match of this series tomorrow at 3:40.  James McDonald will take on Daniel Hudson.