Are The Pirates Interested In Alternative To Alex Presley? 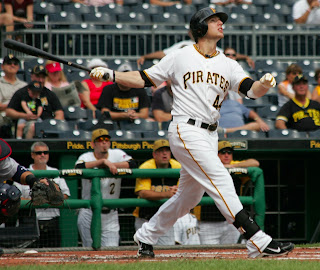 Just yesterday on Fans From The Stands, we discussed the possibility of the movement of the Pirates’ outfielders.  On Monday, Jen Langosch reported that the Bucs may be interested in outfielder Josh Willingham, implying that the team may not be 100% satisfied with their current outfield.
Willingham was one of the players rumored to be of the Pirates’ interest during the 2011 Trade Deadline, during which they eventually acquired Ryan Ludwick.  Josh is 32 years old, and hits for power, not average.  In 136 games last year, he hit .246 with 29 homeruns and 98 RBI’s.  His homerun and RBI totals were higher than those of Andrew McCutchen, the Pirates’ leader in both categories.
It has been reported that Willingham is looking to sign with a team that will guarantee him regular playing time.  Obviously, given the Pirates’ current situation with players like McCutchen, Jose Tabata, and Alex Presley, as well as up-and-coming prospects Starling Marte and Robbie Grossman, the outfield already seems pretty full.  That being said, rumors have swirled about the possibility of using Presley and Marte as potential trade bait, in such a case a regular-playing gig may be available.
This, of course, circles back to the question of Alex Presley.  He had an incredibly surprising and impressive run this past season after joining the big club in June, but with such a small sampling, it’s difficult to determine whether this was an accurate preview of what he can bring to the table consistently in the coming years.  With McCutchen and Tabata occupying two of the three spots in the outfield, and management clearly eyeing other possibilities, it’s apparent that the Pirates are necessarily sold on Presley being the solution at this point.
The worst possible scenario, obviously, would be bringing in a guy like Willingham and having a repeat of what we saw this past year at first base with .  That being said, Willingham brings power to a lineup that sorely needs it.  It should be very interesting to see where Neal Huntington feels the most significance lies.  For now, though, it seems that Presley is still the third piece to the Pirates’ outfield puzzle.
Stay right here for reactions to the latest rumors involving potential Bucco-moves.
And…
As Always…
Let’s Go Bucs!