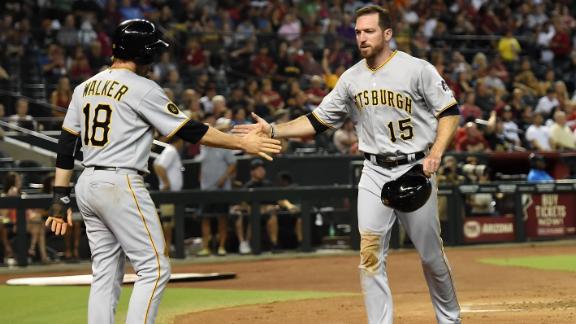 One thing I have never understood about baseball is the rule of hitting a batter after you hit one of our own. Paul Goldschmidt broke his hand last night after being hit by Justin Wilson. That led to speculation that an Arizona Diamondbacks pitcher was going to plunk Andrew McCutchen before tonight’s game was over.

McCutchen would eventually get hit, but not until the Pittsburgh Pirates had all but finished off this game. Cutch would be hit in the ninth inning with Pittsburgh leading 5-1. The Pirates were able to score three runs in that inning on their way to a 8-3 victory.

The Buccos scored first when Josh Harrison hit a solo homer in the third inning. Arizona was able to tie it up in the fifth on a RBI single to right by David Peralta. The game would remain tied until the eighth, when McCutchen drove in a run with a single to third. Pittsburgh was able to extend the lead on a throwing error by Brad Ziegler. The final run of the inning crossed on a Brent Morel double to left center field.

Vance Worley was good through his seven innings of work tonight. He allowed one run on seven hits, while striking out two and walking one batter. Jared Hughes picked up the win while pitching the seventh inning. Tony Watson pitched a scoreless eighth, while Ernesto Frieri was able to score the final three outs in the ninth after giving up two runs.

Pittsburgh has a great opportunity to wrap up this road trip with a 6-4 record, if they are able to pick up a win tomorrow. Game time will be 4:10pm with Francisco Liriano taking on Trevor Cahill. Hopefully the plunked batters fued is over, and the Pirates can focus on playing baseball.