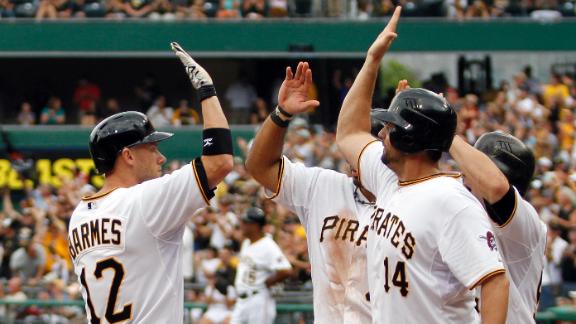 The Pittsburgh Pirates were in the midst of a three game losing streak prior to the first pitch of the finale in a three game series with the San Diego Padres today, and after the first two innings, it looked likeSan Diego was well on their way to a sweep of our Buccos.

But, like they have all year Pittsburghbattled back in the third and fourth innings to gain the lead and cruise to an 11-5 victory in front of 35,352 fans on the north shore.  After a Neil Walker single plated the first run for the Buccos in the fourth, a bases loaded walk of Michael McKenry got the wheels in motion for a huge fourth inning.  Up next was Clint Barmes, and he did not dissappoint.  He would take a Ross Ohlendorf pitch and drive it down the line and off the foul pole for his first career grand slam to give the Pirates a one run lead.

Four more runs would come to the plate for Pittsburghin that inning.  A lot of Buccos had big games today, as Andrew McCutchen went 2-6 with 2 RBI, and Barmes added another hit later on in the game.  However it was the kid from the burgh,Walker, who had the biggest day going 5-5 with 2 RBI, scoring 2 runs, and walking once.

Erik Bedard had a rough start to his day giving up five runs, three earned over the course of five innings.  But once again the defense made two errors in those early innings that led to a bigger deficit and longer innings for the starter.  He was able to calm down over the final three innings and reached base twice today while batting.

The bullpen performed well today as Chris Resop, Chad Qualls, Juan Cruz, and Joel Hanrahan went a combined four innings, allowing one hit and a walk, while striking out a two batters.  Most importantly, they shut down any chance of a Padres rally oncePittsburgh earned such a huge lead.

Each series becomes more and more important as the season goes on, and this next one will be no different.  A four game series with the Los Angeles Dodgers begins tomorrow night, and has the makings of a playoff like atmosphere with the Dodgers only 2.5 games back of the Pirates in the race for the final Wild Card spot.  First pitch tomorrow is scheduled for 7:05.