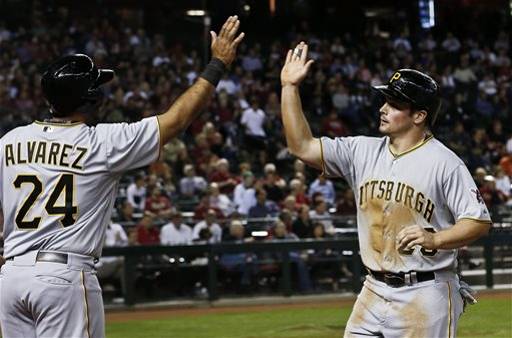 After a much needed win Monday night, the Pittsburgh Pirates were looking to win their first series of the young season.  In order to take down the Arizona Diamondbacks in game two of this three game series, the Buccos would need another strong outing from starter James McDonald.

J-Mac would have a rough first inning on the hill.  He would walk two batters in the first, which would score on a double by Miguel Montero.  That would be followed up two batters later by a Jason Kubel home run.  McDonald would calm down after that inning and finished his night after five plus innings.  His final stat line was five innings pitched allowing four runs on four hits while striking out five and walking four.

The Pirates offense once again showed life tonight, this time against Diamondbacks starter Brandon McCarthy.  Over the course of his 6.2 innings on the mound, the Buccos would collect six runs on ten hits.  Garrett Jones led the way for Pittsburgh going 3-5 on the night with 2 RBI.  He would single in a run in the first and fourth inning.  Starling Marte hit a two run double in the fourth and Neil Walker would add a RBI single to a five run Pirates fourth inning.

The bullpen played a key role once again tonight.  Tony Watson worked through 1.1 innings allowing one run on one hit while walking one batter.  Jared Hughes had a tough .2 inning of work as he would walk two batters before getting out of the seventh.  Mark Melancon had another great night of work in the eighth as he set down all three men he faced, including one by strikeout.  That would lead to Jason Grilli earning his third save of the year and the Pirates winning 6-5.

Nice to see the team come together after a rough first inning for J-Mac.  Once he calmed down the offense came to life and the bullpen was able to work their way out of a couple tough jams.  These two teams wrap up this three game series tomorrow at 3:40pm.  Johnathon Sanchez will work the hill for Pittsburgh, while Arizona will counter with Wade Miley.