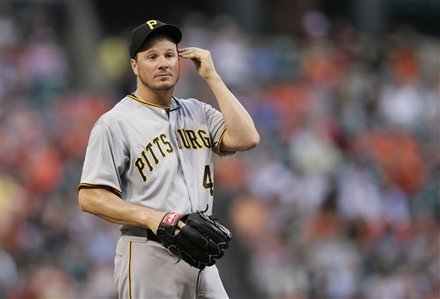 Well one thing is for sure:  the Pirates and their fans will want to act as if these past three games never happened.  Following their 12-6 loss to the Baltimore Orioles tonight, the Bucs have now lost three straight, being swept by the O’s, and now sit three games back of the division-leading Cincinnati Reds.

In three games inBaltimore, the Pirates’ pitching staff, the starters and relievers collectively, gave up a total of 27 runs.  Erik Bedard, similarly to his predecessors in the first two games of the year, struggled tonight, and didn’t even make it out of the fourth inning.  Bedard was tagged for seven runs on eight hits through 3.1 innings, ballooning his ERA to 4.36 for the season.

Doug Slaten came on in relief in the fourth, but he was also roughed up for three runs on three hits.  Chris Resop, on the other hand, pitched a solid three innings, giving up a run on four hits, while Jared Hughes gave up a run in the eighth inning.

For Baltimore, it was a hitting frenzy, tallying a total of 16 hits, including five players with a multi-hit performance.  Matt Wieters and ex-Pirate Steve Pearce each had 5 RBI’s, marking the first time in Orioles’ history two players have done that since 1996.

All of the Pirates’ offensive production tonight came well after the game gotten out of hand.  Rod Barajas belted a three-run homerun in the fifth, scoring Garrett Jones and Casey McGehee.  In addition to Rod’s HR, the other RBI’s came from ground outs by McGehee and Alex Presley, and Pedro Alvarez’s single in the sixth inning.  Jones, along with Clint Barmes and Andrew McCutchen were the only Pirates to have more than one hit tonight.

This was just an embarrassing game, and series, all around for the Pirates.  After their strong performance through June before this series, confidence was high for the Bucs in the clubhouse as well as in the stands.  Now, after a drumming by one of the surprising teams in the American League, we’re all left looking back at the drawing board about what is going on with this team.  Sure, it’s only one series…against an American League team…who is hitting unlike they will the rest of the season…but still, this series hurt…a lot.

The offense scored just 12 runs this series, but what is far more concerning is the sudden pitching struggles.  The trio of Brad Lincoln, Kevin Correia, and Erik Bedard did not get it done this week.  In other news, Jeff Karstens is continuing his rehab, while Charlie Morton had season-ending Tommy John surgery today on his elbow.  With the injury situation the way it is, as well as the struggles from guys like Correia and Lincoln, one would have to wonder if guys like Jeff Locke, Rudy Owens, and Justin Wilson might be getting a hard look in Triple-A.

Not much time for the Bucs to lick their wounds, as they’ll head to Cleveland for a three-game weekend series against the Indians.  After a dismal performance inBaltimore, they need to turn things around in a hurry.