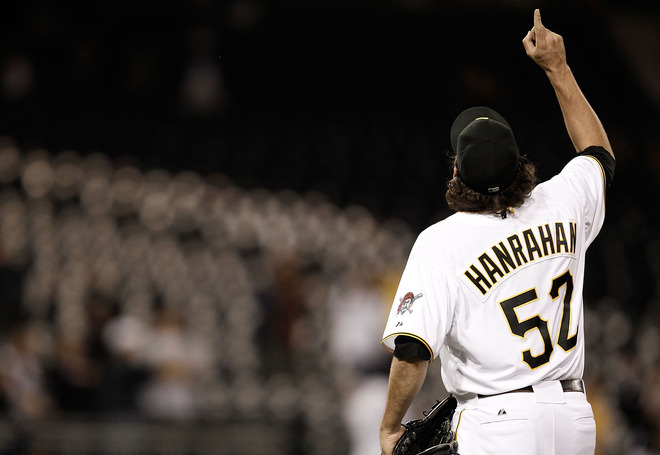 It was literally all hands on deck tonight for the Pittsburgh Pirates bullpen tonight, in their 4-2 victory over the Washington Nationals.  Erik Bedard left the game in the second inning with back spasms.  That is when the bullpen came in, and while it was not always pretty, they worked there way thru the remaining eight innings to keep the victory alive.

Bedard cruised through the first inning and looked to be on his way to another quality start, unfortunately his history of injuries popped back up and that led to Brad Lincoln being the first reliever out of the pen.  Lincoln would go three strong innings giving up one hit, while striking out four, and walking one.  An unearned run was scored in the fourth, when Xavier Nady singled home Bryce Harper.

That run cut into a three run Pittsburghlead.  Those three runs were scored in the third inning.  Neil Walker singled in Lincoln, that was followed up with an Andrew McCutchen RBI single and then Casey McGehee would bring Cutch home on a single to short.

Up next out of the pen was Jared Hughes for two innings.  His stat line was very similar, striking out four while walking one batter and giving up one hit.  The seventh would have Juan Cruz on the bump for the Buccos.  Cruz gave up a double to Danny Espinosa to lead the inning off, and then threw a wild pitch to let him reach third.  With one out he would score on a Chad Tracy sacrifice fly.

The eighth inning had us Pirates fans on the edge of our seats.  Jason Grilli decided to make things interesting by walking the bases loaded with the Buccos up by one.  With one out he would strike out the next two batters to save a narrow lead forPittsburgh.

McCutchen would continue his solid night with a solo homer in the bottom part of the inning to give his team some breathing room going into the ninth.  Cutch had a great night and led the way for the offense again.  He went 4-4, scored two runs, and had two RBI.  The four hits raised his batting average to a team leading .330.

Im not sure whats going on with Joel Hanrahan, for the second straight night he was really off when it came to hitting the target.  Many of his pitches went to the backstop, but unlike the night before he was able to gather the save.

Pittsburghdid what they have seemed to have done for the past two years when they win, and that is battle.  That is just how this team is built, not always pretty, but a check in the win column is what it is all about.  Tomorrow will not be an easy one for the Pirates as they will face Nationals ace Stephen Strausburg.  Kevin Correia will look to find a way to pitch well at PNC Park for the Buccos.  First pitch is scheduled for 7:05.