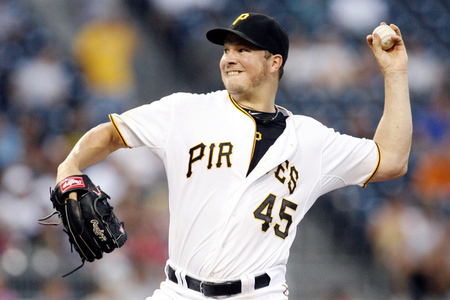 Optimism was at all time high, along with the hot and humid temperatures, at PNC Park tonight as the Pirates opened up their three-game weekend series against the San Francisco Giants.  After sweeping the Houston Astros earlier in the week, the Bucs entered tonight’s game ten games over .500 for the first time since 1992.

Unfortunately for Pittsburgh, Erik Bedard continued his recent struggles on the mound, and the Giants tagged him for five runs in the fourth inning on their way to a 6-5 victory in the first game of the series.

After cruising through the first three innings without giving up a hit, Bedard ran into serious trouble in the fourth, and couldn’t even finish the frame.  The Giants were trailing entering the inning, but after their offensive explosion, headlined by a two-run homerun by Melky Cabrera, they led 5-3.

The bullpen was solid tonight for the Pirates, as usual.  Chris Resop pitched 2.1 effective innings, without giving up a single hit while striking out three batters.  Juan Cruz, though, was touched up for a run in the seventh inning, which turned out to be the difference.  Jared Hughes did pitch scoreless innings in the eighth and ninth.

Andrew McCutchen entered tonight’s game as the league’s leading hitter, and he continued that pace tonight.  Cutch was 3-5 on the night, with a triple, two singles, and two RBIs.  Pedro Alvarez and Casey McGehee each hit a solo homerun as well.

Tonight was a game the Pirates certainly had opportunities to win, but they lost a rare one-run close game.  It’s difficult to see Erik Bedard continue to struggle the way he did tonight, especially with pitchers like Rudy Owens and Jeff Locke pitching so well at Triple A Indianapolis.

The Bucs are now nine games over .500 and will need to win both Saturday and Sunday to take this series from the Giants.  James McDonald takes the hill for Pittsburgh tomorrow against Ryan Vogelsong for San Fran.