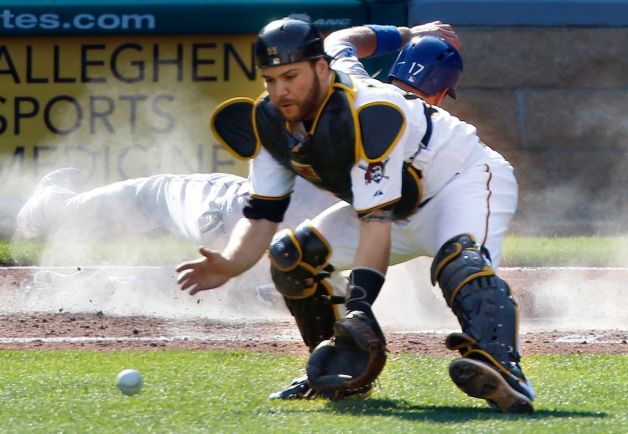 The Pittsburgh Pirates had a number of opportunities to beat the Los Angeles Dodgers this afternoon at PNC Park.  But rather than take advantage of those chances, The Bucs struggled to score runs throughout the game, ultimately falling to the Dodgers, 5-3 in 11 innings.

Check our predictions in our pregame show:

Juan Uribe’s RBI single scored Andrew Ethier in the 11th, leading the Dodgers to a victory over the Bucs in a game full of squandered opportunities.

Brandon Cumpton made his Major League debut today for the Bucs, giving up three runs on seven hits through five innings of work.  He struck out the side in the first inning, to a rousing applause from the PNC Park crowd.  But the Dodgers adjusted to the Bucs’ starter, and by the sixth inning, they were hitting him with regularity, forcing Clint Hurdle to call upon his bullpen.

The Pirates took the lead early in the first inning on Russell Martin’s grounder, scoring Alex Presley, who led off the game with a double.  But Clayton Kershaw, the Dodgers’ ace, kept the Bucs in check for the rest of his seven innings.  L.A. scored a run in the fifth and two runs in the sixth to set them up with a 3-1 advantage.

Neil Walker brought the Bucs within a run with an RBI single to left in the eighth inning, scoring Jordy Mercer.  Travis Snider’s solo homerun in the ninth forced extra innings, but they had multiple chances to win the game, and unfortunately, couldn’t come through in those situations.

Mercer and Walker each had two hits for the Bucs, who managed three hits total against Kershaw.  The Bucs’ bullpen was busy this afternoon, pitching six innings, including Vin Mazzaro’s 11th inning, giving up two runs on three hits.

After the game, we shared our thoughts on the Pirates’ loss on our postgame show:

This was a difficult loss for Pittsburgh, mainly because they had many opportunities to win the game.  They got a formidable start from an unlikely source, but weren’t able to take advantage of it.  They will turn to Gerrit Cole tomorrow afternoon, who will be making the second start of his young career.