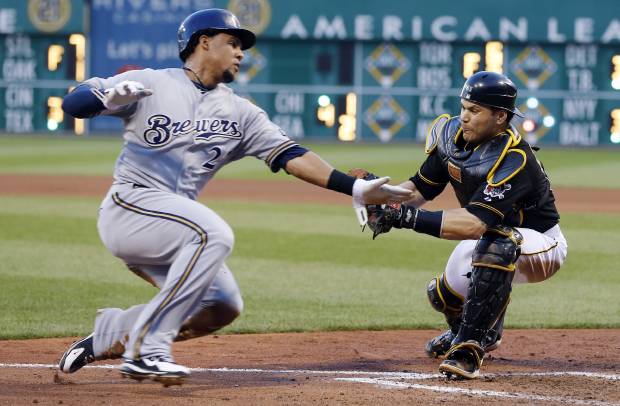 After a 4-3 west coast road trip, the Pittsburgh Pirates returned home for the first of a three game series against the Milwaukee Brewers at PNC Park.  Jeff Locke took the mound for the Bucs, looking to get the home stand off on the right foot, opposing the Brewers’ Kyle Lohse.

Unfortunately, Locke struggled once again tonight, leaving in the fifth inning as the Brewers led the game throughout, and scored another late run to beat the Pirates 7-6.

Locke was touched up for five runs on eight hits in 4.2 innings.  Once he was pulled, the usually reliable Pirates’ shark tank bullpen struggled.  Justin Wilson gave up a run, as did Bryan Morris, who took the loss on the evening.

Things didn’t start off all that well for Locke, but they could’ve been a lot worse.  After an infield single, bunt single, and walk to lead off the game, the Brewers loaded the bases with no outs.  But after Aramis Ramirez grounded into a double play and Carlos Gomez grounded out, the Bucs escaped the inning having only given up a single run.

The Brewers widened the gap in the fourth and fifth innings.  Ramirez hit a solo homerun in the fourth and, after an RBI single by Jonathan Lucroy in the fifth,  Aramis smashed a two-run double to put the Brewers up 5-0, chasing Locke from the game.

Pittsburgh got on the board in the bottom of the fifth on a two-out RBI double by Felix Pie, scoring Andrew Lambo all the way from first base.  Jose Tabata followed with an infield single, leaving runners at first and third.  Neil Walker demolished a three-run blast to deep right, bringing the Bucs within a run at 5-4.  Andrew McCutchen followed with a single, and Pedro Alvarez crushed a two run double to put runners on second and third for Russell Martin.  But the Bucs’ catcher lined out to left to end the inning.

Back to back one-out singles by Lambo and Jordy Mercer set the table in the sixth inning.  Pie’s RBI single down the line scored Lambo, tying the game and chasing Lohse after he gave up his 13th hit.

Ramirez drove in his fourth run of the game in the seventh inning with an RBI single to score the go-ahead run.  But you can’t keep a good BULL down.  Alvarez proved that in the bottom of the inning with his 32nd homerun of the season, hitting off the foul pole in right field to tie the game once again.

The Brewers scored for the last time on a sacrifice fly in the eighth inning, giving them a 7-6 lead, which would eventually be the final.  Pittsburgh threatened in the bottom of the ninth, but with runners on first and second with only one out, Martin flew out and Gaby Sanchez grounded out to end the game.

This was a difficult game to watch for Pirates fans.  Their starter, Jeff Locke, struggled once again.  The bullpen, usually very sharp, gave up a few runs, including the game-winner in the eighth.  And the offense, although they did tally six runs, had many more opportunities to score, and simply couldn’t come through with the big hit.

The Pirates have now lost three games in a row, and are in desperate need of wins the next two nights against the Brewers before this weekend’s series against the St. Louis Cardinals.