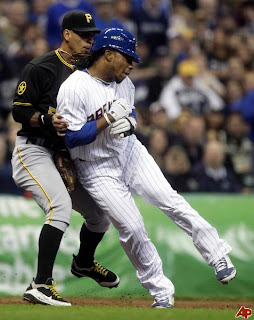 Two weeks ago, this could’ve been a battle for first place in the N.L. Central.  Now, since one team has endured a recent 10-game losing streak while the other has won 13 of their last 15, this weekend’s series between the Pirates and Milwaukee Brewers falls into the same category as most have over the years.  There’s not much at stake, and the Brewers are expected to win easily.
The Pirates start today 10 games back of in the N.L. Central.  While the 10-game skid suffered against the Phillies, Cubs, and Padres have driven a lot of fans away from Bucco interest, there is still a lot for fans to cheer for over the next six weeks.
First of all, the Pirates have had a horrible month of August thus far, and they look like a different team since the All Star break.  But, to their credit, and to the astonishment of quite a few, they traveled to and took two of three from the World Series champion Giants at , a very difficult place to play.
Pittsburgh is 2-1 so far on this road trip, with three left against a team that they are winless against so far this season in five attempts, and against a team they have lost to nine straight times dating back to last season.  The Brewers are playing as good (if not better) than anyone in baseball, and while their road woes plagued them earlier in the year, it seems they are the favorite every time they take the field, whether it be at Miller Park or elsewhere.
So why should we believe that this series will be any different?
Throughout the course of the 2011 season, the Pirates have knocked out one obstacle after another, from drastically improving the road record, to winning series against the Phillies and Red Sox in front of record-breaking crowds, to sending three players to the All-Star game.  But the one thing they haven’t been able to accomplish yet this season has been to beat the Brewers.
This is a statement series for the Pirates.  has no respect for as a baseball team…and up to this point, they shouldn’t.  Ryan Braun, Prince Fielder, Nyjer Morgan, and the rest of the Brewers look down on the Pirates.  They don’t respect them.  The Brewers are proof that small market teams can compete with the big guns in baseball, and they know that.  They are arrogant and they don’t believe the Pirates belong on the same field as them.
The Pirates need to take the next step as a team and prove that they do, indeed, belong on the field with the Brewers, that, while they may have too much ground to make up this season, they do belong in the conversation about the N.L. Central leaders along with the Brewers and Cardinals.
Sitting at 56-60, the Bucs still have a realistic shot at finishing above the .500 mark.  With ten games against both and remaining on this year’s schedule, they can still make a lot of noise, and, at the very least, be a nuisance for both their divisional foes down the stretch.
Starting tonight, it’s time for the Pirates to take a stand against the Brewers.  If  they’re going to beat us, they’re going to need to outplay us for nine innings.  We’re not going to fold.  We’re not going to be intimidated.  We belong on this field with you.  We can compete with you.  And we’re going to beat you…in front of your home crowd.
And…
As Always…
Let’s Go Bucs!