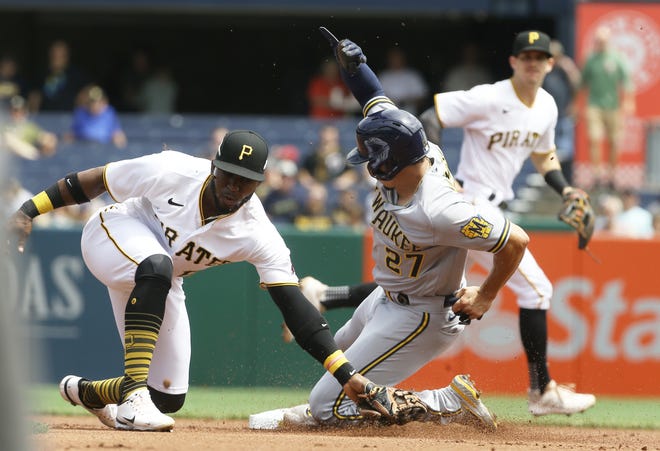 The Pittsburgh Pirates scored 14 runs in the first game of this weekend’s series against the Milwaukee Brewers.  Over the course of the next two games, they managed only a single run.  The result was a series loss to their N.L. Central foes, clinched by a 2-1 defeat on Sunday at PNC Park.

The Brewers improved to 72-47 on the season with the victory.  In stark contrast, the Bucs fell to 42-76 with the loss.  Eric Lauer started for Milwaukee, giving up one run on three hits in four innings.  Brent Suter picked up the victory (12-5), while Josh Hader earned his 23rd save of the season.  Dillon Peters suffered the loss, giving up two runs (one earned) on five hits with three walks in 4.2 innings.

The Brewers came into this series red-hot, but at PNC Park, they managed only 12 runs in the three games.  A single by Eduardo Escobar followed by a throwing error that allowed a run to score and an RBI double by Christian Yelich were all the Brew Crew needed on Sunday.

Milwaukee’s first run of the game came in the first inning when Escobar singled, scoring Willy Adames.  Yelich’s double in the third scored Adames, which turned out to be the game-winner.

A single by Ben Gamel in the bottom of the third scored Kevin Newman to cut the Brewers’ lead in half at 2-1.  Unfortunately, that would be all of the offense the Bucs could muster on this day.

This was a disappointing ending to a great start to the weekend by this Pirates’ team.  From the Brewers’ perspective, they were able to overcome adversity early in the series to take the final two games and the series.  That is what the good teams do….

The Bucs will look to turn the page quickly as they hit the road for the beginning of a very difficult road trip on Monday night against the Los Angeles Dodgers.