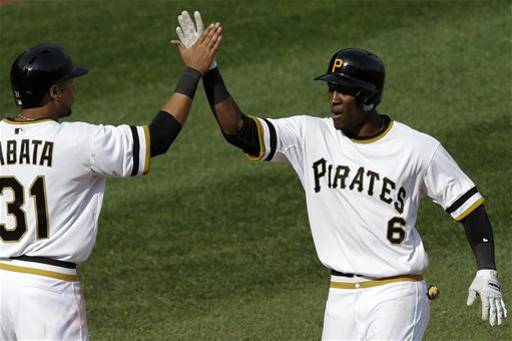 What an exciting weekend, Bucco fans!  The Pirates kicked off what is expected to be one of the more challenging home stands of the season with a three-game series sweep of divisional juggernaut, the Cincinnati Reds.  After two close games on Friday and Saturday night, the Pirates rallied from five runs down, to explode for ten runs late to clinch the series sweep of the Reds at PNC Park.

In this episode of Bucco Beat, the FFTS guys discuss the Pirates’ up and down start to the 2013 season, rebounding from disappointing series against the Chicago Cubs and Los Angeles Dodgers, before getting themselves on track against the Arizona Diamondbacks.

We look at the bright sides of the season so far, including the performances of Starling Marte, Garrett Jones, and Travis Snider, as well as the slow starts by the likes of Pedro Alvarez and Russell Martin.  We discuss the starting pitching rotation, from the solid starts of A.J. Burnett and James McDonald to the questions surrounding names like Wandy Rodriguez, Jeff Locke, and spot-starter Phil Irwin.

We look at the early N.L. Central standings, look ahead to the Pirates’ upcoming series against the St. Louis Cardinals and Atlanta Braves, and re-introduce our favorite segment, Ask Zane Anything!

Check out this week’s podcast, and stay tuned right here to Fans From The Stands for our reactions to the latest news surrounding the Pirates!