Bucco Blast From The Past: Arky Vaughan 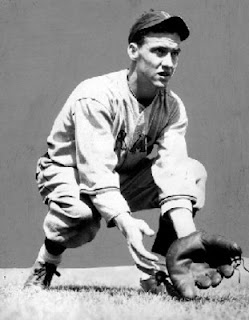 It’s Tuesday, and that means it’s time for another edition of Bucco Blast From The Past!  This week, we keep things in the distant past, looking at the career of Arky Vaughan.
Joseph Floyd “Arky” is an iconic example of a small-town kid who aspired to greatness, as a person and as a professional athlete.  Born in in 1912, he was a Major League shortstop for 16 years as a member of the Pittsburgh Pirates and Brooklyn Dodgers.
Arky made his Major League debut in 1932 with the Pittsburgh Pirates, hitting .318 with 61 RBI in his rookie season.  Over the next ten years as a Battlin’ Bucco, he established himself as one of the best-hitting shortstops in the history of the game.  Vaughan hit over .300 in every season through 1941, and was at or near the top of the league in a number categories consistently, including runs scored, runs batted in, batting average, stolen bases, and walks.
As difficult as it was at the time (and still arguable today), his best season may have come in 1935, when he hit a career-high .385 with 19 homeruns and 99 RBI.  The Sporting News named him Player of the Year, and he was third in the National League MVP voting.  The season has been referred to as “the best ever by a shortstop other than Honus Wagner.”
Arky was traded to the Brooklyn Dodgers in 1941, but was unable to maintain his high standards of play with his new team.  After sitting out a number of seasons, he returned to the club in 1947, when he would play in his only World Series, losing to the New York Yankees.  After leaving the Major Leagues in 1948, he played one more year of baseball, his finale being with the Pacific Coast League’s San Francisco Seals.
He retired with 1173 runs scored 96 homeruns, 926 RBI, 118 steals, a .318 batting average, and a .406 on-base percentage.  His .385 batting average in 1935 is a team record and remained a 20th century record for National League shortstops.
Unfortunately, ’s life was held unexpectedly short.  On August 30, 1952, he was fishing near , when a strong storm sank his boat.  Arky, along with his friend, drowned in the storm.  He was 40 years old.
was inducted into the National Baseball Hall of Fame in 1985.  Arky is the 26th greatest non-pitcher in Major League history, according to win shares.  In his career with the Pirates (1932-1941), he finished with a .324 average, 84 homeruns and 764 RBI’s.
In an organization that historically focuses on the famed careers of Stargell, Wagner, Waner, and Clemente, a small-town guy named is often overlooked.  But given the numbers, along with the impact he had on the club, no one can deny that Arky Vaughan is one of the great Pirates’ players in the history of the franchise.
Be sure to check back next week for another edition of Bucco Blast From The Past!
And…
As Always…
Let’s Go Bucs!