Bucco Blast From The Past: Bob Robertson 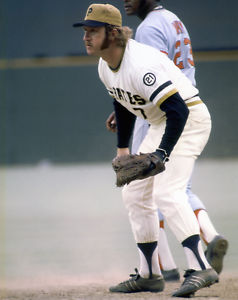 It’s that time of the week again for the latest edition of Bucco Blast From The Past!  This week, we look back at the career of Bob Robertson.
Robert Eugene Robertson was a Major League first baseman in the late 1960’s and 1970’s, spending the majority of his career with the Pittsburgh Pirates.  Born in in 1946, Robertson made his mark first in the minor leagues, leading the league in homeruns three times, quickly being coined as “another Ralph Kiner.”
While his Major League debut came in 1967 with the Pirates, he broke into the team’s regular lineup in 1970, playing alongside Bucco greats Roberto Clemente and Willie Stargell.  Robertson hit .287 that year with 27 homeruns and 82 RBI’s, as the team advanced to the NLCS before being defeated by the Cincinnati Reds.
The following season, Robertson hit .271 with 26 homeruns and 72 RBI’s, as the Pirates went on to defeat the Baltimore Orioles to win the 1971 World Series.  He hit four homeruns in the NLCS against the San Francisco Giants, including three in the game two Pirates’ victory.
His numbers significantly decreased in productivity following the team’s World Series run in 1971.  Bob hit just .193 with 12 homeruns and 41 RBI’s in 1972, .239 with 14 homeruns and 40 RBI’s in 1973 and .229 with 16 homeruns and 48 RBI’s in 1974.  He was eventually reduced to being only a part-time player following surgeries on both knees in 1974.  He finished out his career with the Seattle Mariners in 1978 and the Toronto Blue Jays in 1979.
In his 829 game career, Robertson hit .242 with 115 homeruns and 368 RBI’s.  Nicknamed by Pirates’ announcer Bob Prince as “The Mount Savage Strongboy,” Bob was the first player ever to hit a homerun into the left-field upper deck of Three Rivers Stadium.  Prince was once quoted of his power, saying “Roberston could hit a ball out of any park-including .”
While his career had highs and lows, no one can argue his monumental impact Bob Robertson had on the Pittsburgh Pirates of the early 1970’s, with his most notable contributions coming the 1971 season.  Had he not been part of the lineup, who knows how the NLCS and World Series may have turned out.
Stay tuned next week for another edition of Bucco Blast From The Past!
And…
As Always…
Let’s Go Bucs!