Bucco Blast From The Past: Dave Giusti 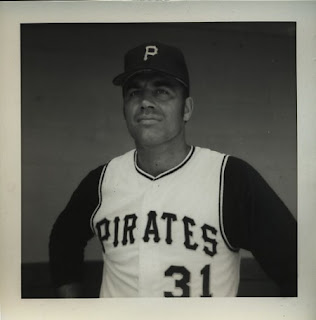 It’s Tuesday, and that means it’s time for another edition of Bucco Blast From The Past!  This week, we look back at the career of Dave Giusti.
David John Giusti, Jr. was a Major League Baseball pitcher who was a member of six baseball organizations over the course of his career, including the Houston Colt .45’s/Astros, St. Louis Cardinals, Pittsburgh Pirates, Oakland Athletics, and Chicago Cubs.
Giusti’s success in baseball began while in college, as he pitched in the 1961 College World Series with .  Out of college, he signed with and played for the Colt .45’s/Astros from 1962-68.
Just before the expansion draft in 1968, Dave was dealt to the Cardinals, who left him unprotected, allowing him to be drafted by the San Diego Padres.  Two months later, he was traded back to the Cardinals.
Following the 1969 season, Guisti would begin an extended stint for the second time in his career, this time with the Pittsburgh Pirates.  Bucco manager Danny Murtaugh converted Giusti into a relief pitcher, which, as it turned out, was a genius decision.
Dave soon became known as one of the leading relievers in the National League.  He recorded 20 or more saves in each of the next four baseball season, and he led the National League with 30 saves in 1971 for the Pirates.  Giusti appeared in three games for the Buccos that year in the World Series, earning a save in Game Four.  He was also awarded the Sporting News Reliever of the Year award that season.
After a tremendous stretch with the Pirates, Dave was traded to the Oakland Athletics just before the beginning of the 1977 season.  This was part of a ten player trade that included some high profile names, including Tony Armas and Phil Garner.  Later that season, the Athletics sold Giusti’s contract to the Cubs.  Following the season, released him, and he officially retired from baseball.
Giusti’s best years were the early 1970’s.  He finished in the top five in the National League in saves every year from 1970-75, and finished in the top ten in games played in the same span.  His career record was 100-93, with an ERA of 3.60.  He recorded 145 saves throughout his career with 1,103 strikeouts.
After his baseball career, Giusti became a corporate sales manager for American Express.  He has been retired from that profession as well for over ten years and living in .
Stay tuned next Tuesday as we once again look back at the career of a Pittsburgh Pirate in next week’s Bucco Blast From The Past!
And…
As Always…
Let’s Go Bucs!