Bucco Blast From The Past: Jack Wilson 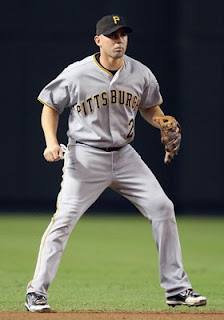 For this week’s edition of Bucco Blast From The Past, we look back at the career of Jack Wilson.

Also known as Jumpin’ Jack Flash, as he as annoyingly and consistently referred to by Greg Brown, was selected by the St. Louis Cardinals in the 1998 amateur draft.  He was later dealt to the Pittsburgh Pirates for Jason Christiansen in 2000, making his Major League debut with the Buccos a year later.
In his nearly eight years with the Pirates, Jack certainly was one of the more memorable and fan-friendly shortstops in recent memory.  After enduring moderately successful seasons in 2002 and 2003, had the best year of his career in 2004, setting personal career highs in almost every category.  He ended the year with a .308 batting average, collecting 201 hits in 157 games.  He became just the ninth shortstop in National League history to collect 200 hits in a season, the franchise’s first player since Dave Parker in 1977, and the team’s first shortstop since Honus Wagner in 1908.
He tallied 12 triples (sharing the league lead), 41 doubles, 11 homeruns, and accumulated 49 RBI.  After hitting eighth in the batting order for most of his career, he became a fixture in the second slot.
also won a lot of notoriety for his defensive accomplishments.  He led the National League shortstops in assists and total chances in 2004, and his 129 double players led all Major League shortstop and broke the club record of 128.  Jack was named to the 2004 All-Star Game and won the Silver Slugger at shortstop.  He was also the Pirates’ representative in the Roberto Clemente Award balloting.
After an injury-plagued 2005 season as the result of an appendectomy, attempted to regain his offensive swagger in the next few seasons, but to no avail.  While his defensive numbers were still impressive, his batting average and offensive production continued to steadily decline.  From the 2006-2009 seasons, was periodically mentioned in trade rumors, but nothing serious ever came of them…that is, until 2009.
After months of rumors and his open comments regarding his dissatisfaction with the organization’s penchant for trading their most notable players, was traded to the  Mariners along with Ian Snell for Ronny Cedeno and Minor League players Jeff Clement, Aaron Pribanic, Brett Lorin, and Nathan Adcock.  The trade, taking place on July 29, 2009, was a shock to everyone, including Wilson himself:
“A shock.  I really don’t know what to feel.  I’m definitely going to miss it.  I definitely loved it there-aside from the record.  The city of is a perfect place to raise my family.”
signed a two-year, $10 million contract with the Mariners in November 2009.  He was sidelined with a fractured right hand for the final two months of the 2010 season, playing in just 61 games total after battling a hamstring issue early on.  He has struggled at the plate over two years in , batting a combined .240 in 92 games.  He has spent the 2011 Spring Training season battling Brendan Ryan for the starting spot at second base.
Regardless of how his tenure ended here in Pittsburgh and what he goes on to do in Seattle or elsewhere, we Pirates’ fans will always remember Jumpin’ Jack Flash as one of the “good guys,” and one of the best defensive shortstops the city has seen in a long time.
Be sure to check back next Tuesday to see who’s featured in the latest edition of Bucco Blast From The Past!
And…
As Always…
Let’s Go Bucs!