Bucco Blast From The Past: Kent Tekulve 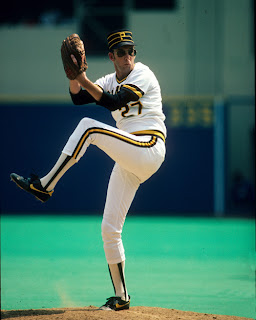 For this week’s edition of Bucco Blast From The Past, we look back at the career of Kent Tukulve.
“Teke” Tukulve pitched for 16 years in the majors with three teams:  the Pittsburgh Pirates, Philadelphia Phillies, and Cincinnati Reds.  He would spend 12 of those years in .  Those who were fortunate enough to see him pitch definitely had to take notice of his submarine pitching style.  Teke was a relief pitcher in an era where he would have to pitch multiple innings, day in and day out.  He pitched a total of 1,050 games, with a win-loss record of 94-90, an ERA of 2.85, and accumulated 184 saves.
Tukulve made his major league debut on May 20, 1974 with the Pittsburgh Pirates.  His best statistical years would come during the ’78 and ’79 seasons, during which he posted 62 saves and an average ERA of 2.54.  He is also a member of the last Pirates’ team to win the World Series.  During that series against the Baltimore Orioles, Teke would save three games.  This helped him earn an All-Star game appearance in 1980.
He would remain in until the 1985 season when he was traded across the state to the Philadelphia Phillies.  Even in his forties, he was still an effective reliever as he would lead the National League in games pitched with 90 in 1987, a record that still stands today as the oldest pitcher to pitch in 90 games at the age of 40.  He then went on to pitch in 37 games with the Reds before retiring in July of 1989 at the age of 42.
Tekulve holds many records in Major League Baseball history.  He shares the record with Mike Marshall as the only pitchers in Major League history to appear in 90 or more games in a season.  Each player did this three times during their respective careers.  Teke also holds records for career innings pitched in relief (1,463 2/3), most appearances and innings pitched without making a start, most career losses without giving up any earned runs with 12, and most intentional walks with 179.
After his career ended, headed to the Phillies’ TV booth for seven seasons from 1991-97.  From there, he became involved with the Washington Wild Things of the Frontier League.  Finally he 2006, Teke returned to as a post game analyst for the Pirates’ games, a duty he still currently performs.
Be sure to check back for our weekly recognition of a former or current Pirate in our Bucco Blast From The Past!
And…
As Always…
Let’s Go Bucs!