Bucco Blast From The Past: Mike LaValliere 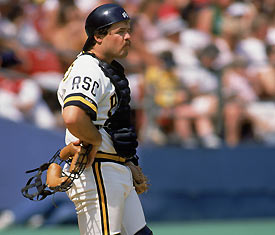 Welcome to another edition of Bucco Blast From The Past.  This week we will look back at the catching career of former Pirate Mike “Spanky” LaValliere.
LaValliere was signed as a free agent in 1981 by the Philadelphia Phillies and started out playing third base.  His time as a catcher began in 1982 and in September of 1984, he made his Major League debut behind the plate.  In 1985 he signed as a free agent with the St. Louis Cardinals and was a member of their ’85 World Series Championship team.
During Spring Training in 1987, Spanky, along with Andy Van Slyke and Mike Dunne, was traded to for catcher Tony Pena.  This trade helped lay the foundation for what would be three straight National League Championship appearances for the Pirates from 1990-92.  The 1987 season also saw him win a Gold Glove Award for his defensive skills behind the plate.  Over parts of seven seasons with the Pirates, Mike hit .269 with 13 homeruns and 207 RBI.
Unfortunately for LaValliere, his final moment in the Buccos’ spotlight is the image of him reaching back desperately trying to tag Sid Bream, as he slid across home plate to give the Atlanta Braves a 4-3 series win in the 1992 NLCS.
During the 1993 season the Pirates released Mike and he spent the next three seasons with the Chicago White Sox.  He made it to the American League Championship Series in 1993, but fell short of reaching the World Series when the Toronto Blue Jays won in six games.
After the 1995 season, he retired from baseball after 12 seasons.  He currently lives in , , where he works with former pitcher Don Robinson at their baseball facility “Big League Experience.”  The two former professional baseball players work with kids from Little League to college prospects on the art of pitching, catching, and hitting.
Be sure to join us again next week for an all new Bucco Blast From The Past!
And…
As Always…
Let’s Go Bucs!