Bucco Blast From The Past: Nellie Briles 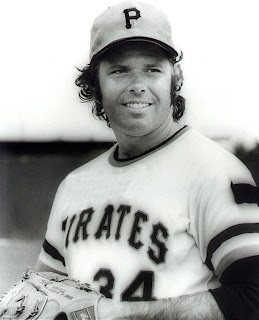 It’s Tuesday, and that means it’s time for another edition of Bucco Blast From The Past!  Inspired by the Pirates’ History segment during the game at this past Saturday, Fans From The Stands looks back at the career of Nellie Briles.
The right-handed hurler from entered the league as a reliever, but ended up pitching complete games in two of the most important World Series games for his teams.
Nelson Kelley “Nellie” Briles pitched for five different teams during his Major League career from 1965-1978.  He began his career with the St. Louis Cardinals as a reliever and spot starter.  After Bob Gibson suffered a broken leg when he was hit by a Roberto Clemente line drive on July 15, 1967, Nellie was promoted into the starting rotation.  He won nine straight games, leading the National League in winning percentage, as well as the Cardinals’ staff in ERA.  He also threw a complete game against the Red Sox in Game 3 of the 1967 World Series.
Briles won a career-high 19 games and 15 games the following two seasons in 1968 and 1969, but then slumped noticeably the next two years.  Before the 1971 season, the Cardinals traded Nellie, along with Vic Davalillo, to the Pittsburgh Pirates for Matty Alou  He went 8-4 for the Pirates that season and pitched a complete game, two-hit shutout against the Baltimore Orioles in Game 5 of the 1971 World Series.
Following his run with the Pirates from 1971-1973, Nellie played ball for the Kansas City Royals, Texas Rangers, as well as the Orioles.  He retired following the 1978 season.
After retiring as a player, Briles returned to and became a television sportscaster in 1979.  He went to work for the organization in 1986 as director of corporate sales and he was also the director of the Pirates’ annual fantasy camp.
Sadly, his life was cut way too short.  While participating in the annual Pirates’ alumni golf tournament in , Briles collapsed and died of an apparent heart attack.  He was 61 years old when he died in 2005.
Be sure to check back next Tuesday to see who’s featured in the next Bucco Blast From The Past!
And…
As Always…
Let’s Go Bucs!