Bucco Blast From The Past: Ralph Kiner 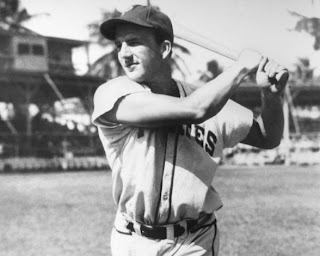 Welcome, Pirates’ fans, to this week’s edition of Bucco Blast From The Past.  Today we look back on the Hall of Fame career of Ralph Kiner.
After serving as a U.S. Navy pilot during World War II, Kiner made his Major League debut on April 12, 1946 with the Pittsburgh Pirates.  He finished the season with 23 homeruns and 109 strikeouts.  During the offseason baseball great Hank Greenberg worked with Kiner and the results showed the following season, as his homeruns jumped to a league leading 51 and he struck out less than 100 times.  Ralph hit many of his homeruns over the short fence in left and left-centerfield at Forbes Field, during his time this part of the fence was known as “Kiner’s Korner.”
In 1949, Kiner became the first National League player to have two 50 homerun seasons, when he hit 54.  He topped 40 homeruns and 100 RBI from 1947-51.  Ralph was selected to six straight All-Star games from 1948-53 as a left fielder.
His career with the Pirates ended on June 4, 1953 when he was traded because of a salary dispute with general manager Branch Rickey, to the Chicago Cubs as part of a ten-player deal.  He played two seasons with the Cubs and finished his career with the Cleveland Indians in 1955.  His final career batting status were 369 homeruns with 1,019 RBI and a .279 batting average.
After his playing days, Kiner became a broadcaster for the Chicago White Sox in 1961.  The following year, he began broadcasting games for the expansion New York Mets.  2011 will mark his fiftieth year calling Mets’ games, although he only makes the occasional guest appearance.
Kiner was elected to the Baseball Hall of Fame in 1975.  In 1984 the Mets elected him to the team Hall of Fame.  The Pittsburgh Pirates retired his number 4 in 1987.  In 1999, The Sporting News named him the 90th baseball player on their list of “The 100 Greatest Baseball Players.”
Be sure to check back next week for another edition of Bucco Blast From The Past.
And…
As Always…
Let’s Go Bucs!