Bucco Blast From The Past: Rob Mackowiak 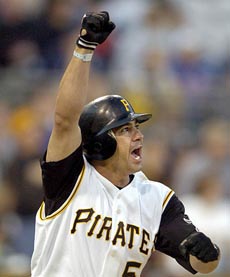 For this edition of Bucco Blast From The Past, we look at Rob Mackowiak.
Mackowiak played eight Major League seasons for four teams.  His longest stint was from 2001-05 with the Pittsburgh Pirates.  Rob was a utility-man for the Buccos as fans could see him play the outfield, second base, or third base on game days.

Rob Mackowiak was a 53rd round draft pick of the Pittsburgh Pirates in 1996.  He made his MLB debut on May 19, 2001 for the Pirates against the Milwaukee Brewers.  Eleven days later he would record his first major league home run against the Florida Marlins off of right-hander Braden Looper.  Mackowiak would contine to be a member on the Pirates roster for the next four seasons. His best season as a Bucco was 2004 when he had a career high of 17 home runs and 75 RBI.  Pirates fans may best remember Rob for his heroics on May 28, 2004 against the Chicago Cubs.  During game one of a double header Mackowiak hit a walk-off grand slam, he would follow this up by hitting the game-tying home run in the bottom of the ninth in game two.  What made this an even more memorable, was that it was on the day his son was born.

After 2005, Rob would continue his career with the Chicago White Sox where he continued to be a utility man along with being a designated hitter.  In 2007 he was traded to the San Diego Padres.  His final appearance in the Major Leagues came in 2008 with the Washington Nationals.  He would be released by the team in June and finished his career playing at the AAA level with the Louisville Bats of the Cincinnati Reds organization and the Columbus Clippers who are an affiliate of the Cleveland Indians.
Currently, Rob is getting ready to begin is second season as hitting coach for the Windy City Thunderbolts of the Frontier League. While Rob Mackowiak may not have had a Hall of Fame career, his hard work and play on the field in a Pirates uniform will always be remembered by battlin bucco fans.
Comments on Bucco Blast From The Past?  We’d love to hear from you!  Send us an email at fansfromthestands@yahoo.com
Be sure to check back for our weekly recognition of a former or current Pirate in our Bucco Blast From The Past!
And…
As Always…
Let’s Go Bucs!