Bucco Blast From The Past: Zane Smith 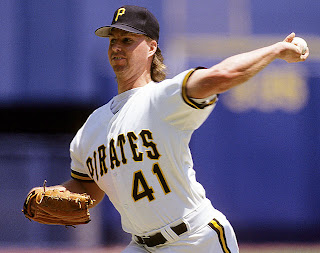 For this week’s edition of Bucco Blast From The Past, we look back at the career of Zane Smith.
Smith is a native of , and spent a total of six seasons with the Pittsburgh Pirates.
He went to college at and was drafted in the third round of the 1982 draft by the Atlanta Braves.  After parts of three seasons in the minors, Zane made his Major League debut on September 10, 1984 for the Braves.  During a game against the New York Mets in 1986, he struck out 12 batters to end their 11-game winning streak.
Smith had this best season in an uniform in 1987.  His 15 wins that year led the team and ranked fifth best in the league.  He was also fifth in the league in innings pitched, first in starts, fourth in complete games, and third in shutouts.
The Montreal Expos acquired Smith from the Braves on July 2, 1989 for three players.  Zane was north of the border for only one year as he headed back to the “lower forty-eight” at the trade deadline the following season.  Traded to the Pirates for three players, most notably Moises Alou, many saw the move as a win for the Expos.
Smith showed his worth as the Buccos were able to hold off the Mets down the stretch and win their first of three straight National League East Division titles.  The title sent the Pirates to the playoffs, making their first appearance in eleven seasons.  During this stretch, Smith went 6-2 with a 1.30 ERA.  Three of the wins were complete games, two of them being shutouts.
After the strike-shortened 1994 season, Smith signed a one year contract with the Boston Red Sox.  His time in showed the beginning of the end of his career.  His final appearance with the Sox was a walk-off homerun to Tony Pena of the Cleveland Indians in the 1995 American League Division Series.
After a year of struggling in , Zane returned to for the 1996 season.  He made his final start on July 5, as the Pirates released him the next day.
Zane Smith currently resides in .  For those of us too young to remember the 1979 World Series, but old enough to remember the 1990 seasons, Smith is a name that will carry on with us for a lifetime.
Be sure to check back next Tuesday to see who’s featured in the latest edition of Bucco Blast From The Past!
And…
As Always…
Let’s Go Bucs!