Bucco Blast From The Past! 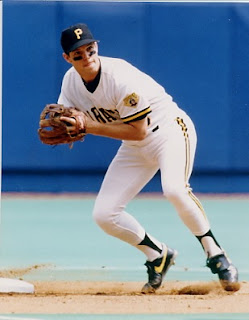 Each week, we at Fans From The Stands will be recognizing a Pirate, former or current, at random, acknowledging his accomplishments while also giving us Bucco fans a blast from the past and a trip down memory lane.
For the inaugural Bucco Blast From The Past segment, we recognize Jay Bell.  played in the Major Leagues from 1986-2003, which included a seven year stint with the Pirates.  He won a Gold Glove Award in 1993, snapping Ozzie Smith’s streak of 13 straight awards.  Additionally, it was the first Gold Glove by a Pirate shortstop since 1966-67, when Gene Alley won the award in back-to-back seasons.
Jay began his MLB career with the Cleveland Indians from 1986-1988, and following his run with our Buccos, he jumped from the Kansas City Royals (1997) to the Arizona Diamondbacks (1998-2002) to the New York Mets (2003).  Throughout his career, he maintained the reputation as one of the top shortstops in the game, due to his high baseball IQ and phenomenal anticipation on both the offensive and defensive ends.
While he initially entered the league as a singles and doubles hitter, added diversity to his offense, becoming a superb bunter while also showcasing his power by hammering over 20 homeruns in two consecutive seasons (1997-98).  He was a career .265 hitter, totaling 195 homeruns, 868 RBIs, 1123 runs scored, and 91 stolen bases.  In addition to being awarded the Gold Glove in 1993, he was also selected to the All-Star Game that same year as well as in 1999.
Currently, serves as a member of the advisory board of the Baseball Assistance Team, an organization devoted to helping former players through financial and medical difficulties.  While he was a member of five different teams throughout his productive career, we all consider Jay Bell a Pittsburgh Pirate, now and forever.
Be sure to check back for our weekly recognition of a former or current Pirate in our Bucco Blast From The Past!
And…
As Always…
Let’s Go Bucs!