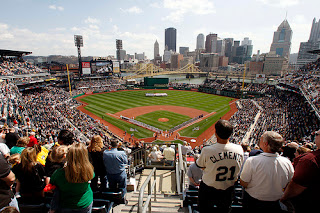 Even though the Pirates wrapped up their 2011 season last month, there is still a fair share of buzz surrounding the team.  Thus, our first edition of Bucco Blurb, right here on FansFromTheStands!
Coaching Staff To Return in 2012:  As was announced a couple of weeks ago, Manager Clint Hurdle’s entire 2011 staff will be returning next season.  Despite complaints from fans during the late-season collapse of the Pirates this year, management seems content with the coaching staff and has invited them back for 2012.  Each of the coaches had been working under terms of a one-year contract.
Bucs Hire New Athletic Trainer:  Todd Tomczyk was hired by the Pirates earlier this month to replace former athletic trainer Brad Henderson, who had been with the team since December 2002.  was let go by the team at the end of the season.  Tomczyk is a Bethel Park native and has his degree from .  He spent the previous five seasons with the Los Angeles Dodgers, and prior to that, was a member of the Cleveland Indians’ organization for eight years.
Charlie Morton Has Hip Surgery:  Charlie Morton, one of the most improved players on the Pirates’ 2011 roster, underwent hip surgery earlier this month.  The Pirates (and Morton) have been told that the typical recovery time for this type of procedure is six months.  Looking ahead, this would indicate that Morton will miss Spring Training and the start of the regular season in 2012.  The surgeon who performed the procedure said that the recovery window could be as little as four months.  Morton will be on crutches for at least four weeks, and he expects to begin playing catch again in about 2-3 months.
Pirates Ink Broadcasting Deal With KDKA-FM:  Our Battlin’ Buccos have agreed to a broadcasting contract with Sportsradio 93-7 The Fan, which is good for all 162 regular season games, as well as a minimum of 16 Spring Training games.  The Bucs’ pre- and post-game shows, as well as the “Neal Huntington Show,” which airs every Sunday during the season, will not be affected by the change.  The Bucs’ broadcast team of Greg Brown, Tim Neverett, Steve Blass, Bob Walk, and John Wehner will return in 2012.
Pirates Announce 2012 Spring Train Schedule:  The Bucs’ schedule features 15 home games at McKechnie Field, including matchups against the Yankees, Red Sox, Tigers, Phillies, and Rays, as well as a March 26 game hosting the Orioles, which will be the Pirates’ only home night game.  The Grapefruit League schedule kicks off on March 3 when the Pirates travel to to face the Blue Jays.  After the Grapefruit League schedule, the Bucs will travel to for two exhibition games, before returning to to open up the 2012 regular season hosting the Phillies on April 5.
Stay tuned to Fans From The Stands for all the latest Pirates news and analysis throughout the offseason.
And…
As Always…
Let’s Go Bucs!