Bucco Blurb: Future Of First Base? 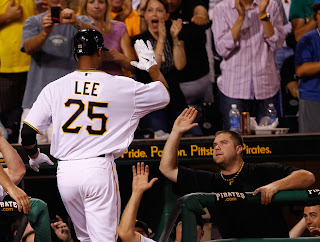 There’s no denying the fact that the Pirates have a lot of questions to answer and decisions to make in regards to their prospective 2012 roster.  Perhaps the greatest question at this point, though, is who will occupy first base when the Bucs open their season in April?  With the tragedy that was in a Pirates’ uniform is a thing of the past, Derrek Lee’s brief stint was incredibly impressive, but factors including his age, salary, and interest level, have raised many doubts as to whether or not he will be a Pirate next year.
That being said, the Pirates have said that one of their priorities is to fill this hole at the corner, and while the free agent market is rather weak compared to previous seasons, there are some options available for the Pirates to acquire a seasoned veteran first baseman.
Yahoo! Sports contributor Lee Andrew Henderson’s November 2 article suggested ten first base options for the Bucs, and in reflection, some appear plausible, others are pipe dreams, while a few are nightmares.
’s top suggestion, according to the article, is Adam LaRoche?!  As we all know, LaRoche already had some time in , and was one of the more frustrating Pirates in recent memory.  During his time with Pittsburgh, he hit .270 with 20 homeruns and 80 RBI’s, but for those of us who watched him play, he had no clutch gene, and the majority of his offensive contributions came at times when the game and/or the season was already out of reach.
Other notables include Josh Willingham and Carlos Pena, two players who were rumors to be in negotiations with the Pirates prior to the trade deadline this past season.  Mark Reynolds was also mentioned, who, despite his incredibly high number of strikeouts, has seasons of 28, 44, 32, and 37 homeruns.  Andrew McCutchen led the Pirates last season with 23 homeruns.  Would the Bucs be willing to tolerate the strikeouts of a guy like Reynolds or Pena in exchange for the power?  They already sent a record last season for strikeouts, but they had no power in their lineup.
James Loney is certainly an attractive option, but, as stated in the article, there may be some bigger market frontrunners in line for him, and the Pirates clearly can’t compete with them.  The mention of Nick Swisher is a laugher. This guy will not end up in .
Finally, two of Henderon’s suggestions are players who have most recently worn a Pirates’ uniform:  Ryan Doumit and Derrek Lee.  He’s suggesting that Doumit could platoon first base with Garrett Jones.  We all saw how the platoon strategy worked with Jones in right field…it was horrible.  Doumit isn’t a great catcher, but he’s not the answer at first base either.  As for Lee, he put on a spectacular show in following his acquisition at the trade deadline.  He is clearly aging but still has some good baseball left in him.  It appears as though the Bucs would be interested in bringing Lee back assuming financial factors are agreed upon and Lee wants to play next year.
An internal rumor in that is Pedro Alvarez will make the transition to first base, but after the horrid year he had in 2011, it seems ludicrous to add a position change to Pedro’s list of adjustments.  Regardless, the Pirates are (or at least should be) conscientious not to allow another Lyle Overbay-type situation as they did this past season.  Loney, Pena, Lee?  How about Morrison of the Marlins?  Pena seems to be the most plausible option, and he’s proven to be able to add a serious amount of pop to the lineup, something the Pirates desperately need going forward.
Stay tuned to Fans From The Stands for fan reactions to the latest Pirates’ news and updates.
And…
As Always…
Let’s Go Bucs!