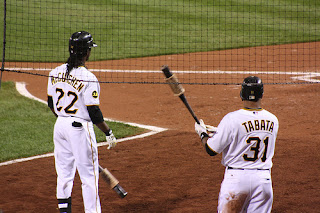 One of the most impressive aspects of the Pirates’ 2011 season was the play of their outfielders.  Andrew McCutchen is quickly becoming a superstar, while Alex Presley and Jose Tabata were extremely productive in their limited seasons.  So why, in an offseason in which they have gaping wholes in other positions, are the Pirates being subjected to trade values and rumors about their outfielders?
There have been varying thoughts in the media and general population that have suggested pros and cons to trading each member of the Pirates’ outfield, including McCutchen.  Clearly, that doesn’t appear to be in the minds of management at this time.  After all, Cutch is the best player on the team, and, among other reasons, at this point, it would be very difficult for the Bucs to receive the proper return value for him.
Similarly, Tabata is staying put in a Pirates’ uniform for quite some time, as his new contract signed just at the end of last season has him under team control through the 2019 season.  In addition, he’s still in his low 20’s, with his numbers improving, suggesting that his best years are still ahead of him.
Alex Presley remains from the Pirates’ end-of-season starting lineup, and he seems to be the most likely candidate to be dealt this offseason.  Despite an impressive performance in the 2011 season, Presley is much older than Tabata (he’ll turn 27 next year), and there’s a very small sample of baseball to judge his long-term effectiveness at the Major League level.
Further, the Bucs have two outfielders, Starling Marte and Robbie Grossman, in the minors who are expected to be ready to contribute for the big club in the next year or two.  Certainly, as the past has suggested, it is more likely to expect one to meet expectations, so that leaves a decision to be made in the Pirates’ outfield.  But will it be made now by trading Presley in the offseason, or will it be made in a year or two once the team is aware of the development of Grossman and/or Marte?
Consequently, however, it has also been suggested by some, as was acknowledged by Jen Langosch last week, that there may be a strategy associated with dealing Marte for a power-hitting position player.  Neal Huntington has said in the past that the team would be willing to trade prospects for the right return, and considering the fact that Marte was rumored to be available for a deal around the Trade Deadline this past season, it would be reasonable to assume that is still the case this offseason.
As surprising and impressive as Presley’s play was this past season, it is definitely worth considering how small of a sample that was, and his age, when compared to the likes of the others that are in the running for the third spot in the outfield, he appears to be on the short end of the stick.  He could fall subject to a trade bundle along with a couple others in return for a veteran position player in the outfield or otherwise.
At this point, Marte is expected to begin the 2012 season at the Triple-A level, while Grossman is expected to undergo surgery on his hamate bone this week, but he should be ready for Spring Training in 2012.
Stay tuned to Fans From The Stands for reactions to the latest news and rumors surrounding the Pirates.
And…
As Always…
Let’s Go Bucs!