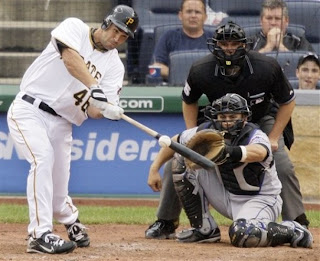 First off…let’s dismiss any inkling of a rumor that the Pirates are looking to deal Andrew McCutchen.  The Bucs own the rights to Cutch for the next four years, and even though there was a note yesterday that the team would be willing to listen to offers for him, that doesn’t mean anything’s going to happen.  It won’t any time soon…according to local writers.

That aside, the Bucs are focusing on the arbitration deadline approaching in less than two weeks.  Nine players will be affected, and it will be very interesting to see how the team addresses each of their situations.  Here is a list of the players the Pirates have to make decisions about in regards to whether or not to tender a contract.
Jason Grilli
Joel Hanrahan
Garrett Jones
Jeff Karstens
Evan Meek
Charlie Morton
Ross Ohlendorf
Chris Resop
Jose Veras
In terms of relievers, based on comments from local writers and insiders, it seems as though out of Grilli, Meek, Resop, and Veras, the Bucs will want to bring two or three of them back for 2012.  If this is the case, I think Jose Veras is the odd-man out.  He had some big moments this past year, but he’s also had some horrific moments, and his control wavered down the stretch.
Evan Meek should definitely be with the Bucs next year.  His performance in 2011 can’t really be judged with much significance, due to injury.  We can’t forget about his 2010 season, and given his age and upside, he should be (and hopefully will be) vying for the setup job in the bullpen beginning the 2012 season.  Jason Grilli will be his stiffest competition for the setup spot.  At the time he was brought on board, I was rather surprised by the move, but the Pirates have proven to make a nice acquisition.  Grilli was very surprising and impressive this past year, and there’s no reason to believe he won’t be able to continue that level in 2012.
That leaves Chris Resop, with whom the Pirates could go either way here.  He’s coming off his most successful season, despite a couple rough months.  His “call-to-fame” in 2011 was his ability to shut batters down when he came in with runners on base.  He was able to get outs with runners in scoring position.  This is extremely valuable to any team, especially a team like the Pirates that needs to prevent as many runs as possible to compensate for lower offensive numbers.
Charlie Morton, Jeff Karstens, and Joel Hanrahan are all givens.  They’ll be in Pirates’ uniforms next year.  There were rumors about the value of Hanrahan going up and things of that nature, but he’ll be a Buc this year.  Ross Ohlendorf SHOULDN’T be tendered a contract.  He’s had two straight bad seasons, having won just two games in 30 starts.  He still remains on the team’s roster at this point, but I still can’t see them keeping him around.
Garrett Jones is an interesting one, and maybe the contract situation will determine what they’re doing with the first base situation, or vice versa.  The team still doesn’t have a first baseman, and obviously Jones can do that.  However, is he an everyday productive first baseman?  Not sure about that.  If the Bucs acquire someone else, it becomes a question of whether they’ll be willing to pay a bench player that type of money.  I think, regardless of whether he’s in an everyday role or a platoon/bench role, G.I. Jones needs to be on the roster in 2012.
Stay tuned to Fans From The Stands for all of the latest on the Pirates’ rumors and news.
And…
As Always…
Let’s Go Bucs!