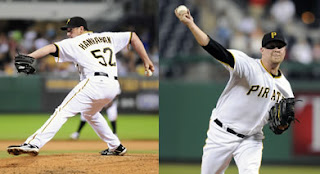 As spring training quickly approaches, there are still many lineup issues and decisions to be made, which is to be expected from a team that lost over 100 games last season.  Among these is the choice of designated closer for 2011.  The race is undoubtedly between Joel Hanrahan and Evan Meek.  Following the trade of Octavio Dotel just minutes before the trade deadline last summer, the responsibility of closing out ballgames fell in the laps of these two hard-throwing right-handers.  Hanrahan picked up six saves last year to Meek’s four, accumulating nearly 1/5 of the Buccos’ victories.
While the fans and media are in the dark in terms of who Pirates’ management is favoring for the closer role, the two lead candidates don’t seem to know much more than anyone else.
“They haven’t said anything,” said Meek. “In terms of management officials making their decision, they have haven’t said anything, but it isn’t something that should keep you up at night. Whether it is the eighth or ninth inning that I end up working, you still need to go out and get three outs. You know that as a person who does what I do.”
These sure are encouraging words from the Pirates’ All-Star representative from a year ago.  The key will be if the Pirates’ starting pitchers and offensive lineup put Meek and/or Hanrahan in a position to save the game.  After all, it’s difficult to compare potential closers when they weren’t really given that many opportunities to complete games.  Relief pitchers are generally individuals of habit, and it was difficult for Meek and Hanrahan to settle into any routine in the bullpen because of uncertainty.
As one would expect of these two players, though, Meek and Hanrahan said there is not anything adversarial between them, even as they, in essence, compete for the same role.
For more information, check out the player profiles on Joel Hanrahan and Evan Meek.
And…
As Always…
Let’s Go Bucs!