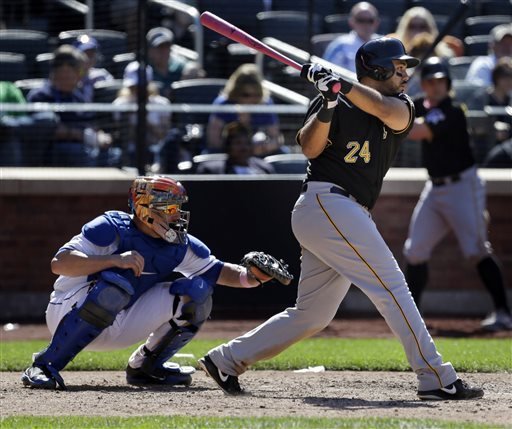 Matt Harvey entered this afternoon’s game against the Pittsburgh Pirates as one of the top pitchers in all of baseball.  Today at Citi Field, he was good…but not great (at least by his standards).  The Bucs managed a couple of runs off the New York Mets’ ace, and scored again late in a 3-2 victory.

Jeanmar Gomez had the difficult task of opposing Harvey on the mound this afternoon, but he certainly proved to be up to the task.  He gave up just one run on two hits through his five innings of work.  Other than a solo homerun to Lucas Duda in the second inning, Gomez kept the Mets in check throughout, lowering his ERA to just 2.28 for the season.

The Bucs bullpen was solid again today.  Vin Mazzaro, Justin Wilson, Mark Melancon, and Jason Grilli combined to pitch four innings, giving up a total of one run on two hits.  Grilli, who set the Mets down in succession in the ninth, earned his 15th save of the season.

After falling behind 1-0 on Duda’s homerun, the Bucs scored two runs in the third inning.  Clint Barmes led off the inning with a solo homerun.  Starling Marte then drew a walk, and Travis Snider smacked a single, and Andrew McCutchen drew a walk as well.  Garrett Jones’ sacrifice fly to right allowed Marte to score, giving the Bucs a 2-1 lead.

The Mets tied the game in the seventh, but the Pirates battled back with a run of their own in the eighth.  Pedro Alvarez’s RBI single scored McCutchen, giving the Bucs the 3-2 advantage, which would eventually be the final.

The Pirates were impressive this weekend against the Mets.  As we know, they traditionally struggle in New York, but after difficult loss on Thursday night in walk-off fashion, they battled their way back, winning three in a row and claiming this four-game series.  Alvarez had two more hits today, bumping his average up over .200, while Barmes had his second consecutive two-hit game today.  As we’ve talked about, the Pirates’ offense does as Pedro Alvarez does, and today…Pedro delivered.

The Bucs return home to Pittsburgh for the start of a four-game series against the Milwaukee Brewers at PNC Park tomorrow.  A.J. Burnett will start for the Pirates.  First pitch is scheduled for 7:05pm.