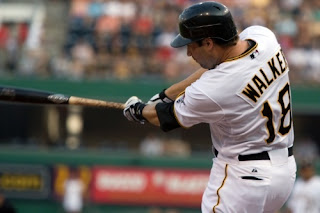 When a team has had a losing season for nearly two straight decades, one would expect personnel changes and lineup alterations to be a consistent aspect of that club’s history.  As the Pittsburgh Pirates enter the 2011 season here in a couple months, they certainly have their fair share of decisions to make to improve the team’s performance from years past.  While people are still buzzing about the star potential of Jose Tabata and slugger Pedro Alvarez, and while Bucco management is pondering over the pitching rotation, as well as find adequate spots in the lineup for players including Garrett Jones and Ryan Doumit, there remains one constant:  Neil Walker is the Pittsburgh Pirates’ second baseman.  At least, for now.
The Buccos’ infielder is coming over an incredible, and utterly unexpected, season.  hit for a .296 average with 126 hits, 12 homeruns, 29 doubles, and 66 RBI through only 110 games.  Not bad for his first “full” season at the Major League level.  Without a doubt, this was Neil’s groundbreaking year, impressing his teammates and opponents alike with his solid defense, patient hitting, and his ability to drive the ball out of the ballpark.  His only previous MLB experience came in 2009, where he hit just .194 through 36 at bats, only appearing in 17 games.  Throughout the course of the 2010, Pirates’ fans had the privilege to watch the 25 year old grow up right before their eyes on the baseball field, on his way to an astounding rookie season for the Pirates as well as for the rest of the National League.
So with the upcoming season vastly approaching, what can we expect from on his encore?  Well first of all, without a doubt, no matter how impressive of a season he has this year, he will not live up to expectations that fans and sports’ critics will bestow upon him.  Don’t get me wrong, had a phenomenal season and he’s a solid baseball player, both with the bat and with the glove.  But we, in , have the tendency to get a little overzealous with our sports’ teams.  Just because Neil hit .296 with 12 homeruns and 66 RBI in 110 games last season, that doesn’t mean that he should be over .300 with at least 20 homeruns and close to 100 RBI if he plays a full season.  fans are loyal to their sports’ teams, but they’re also VERY hard on them.  Let’s hope this isn’t the case for Real Deal  Neil at 2nd base this season.
Ideally, with the bats of Tabata and Andrew McCutchen only improving from last year, along with the power potential of Alvarez and Jones as well as momentary contributions from others along the way, the pressure shouldn’t be on to put up such amazing numbers.  Still, we, as Pirates’ fans, should feel comfort in the fact that despite all of the questions still on the board with this baseball team, we have a reliable, hard-working, solid baseball player and hometown kid fielding balls at 2nd base.
For more on Neil Walker, check back here at Fans From The Stands as well as the Official Pirates Website.
And…
As Always…
Let’s Go Bucs!