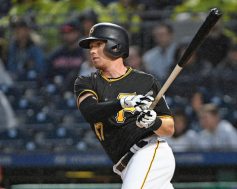 The Pittsburgh Pirates earned a much needed victory tonight over the Cincinnati Reds at PNC Park.  With some solid pitching a timely homerun, the Bucs snapped their four game losing streak with a 5-0 victory.

Jameson Taillon pitched a solid game for Pittsburgh tonight, giving up three runs and one walk in six innings of shutout baseball, while A.J. Schugel, Daniel Hudson, and Felipe Rivero each pitched a scoreless inning of relief.

The Bucs and Reds were in a pitchers’ duel until the bottom of the seventh inning, when Starling Marte singled home John Jaso to give the Pirates a 1-0 lead.  Jordan Luplow’s second career hit, and first MLB homerun, in the bottom of the eighth scored three runs to give the Bucs a 4-0 lead, and they would add another run later in that inning to go on to a 5-0 win.

This was a nice win on a rainy Saturday night for the Pirates.  While they have certainly played themselves out of any type of playoff contention, the Bucs still battled tonight against an opponent they have struggled against this season.  It was a big night for Taillon and Luplow, and it sets the stage for a rubber match tomorrow afternoon against the Reds at PNC Park.  First pitch is scheduled for 1:35pm.