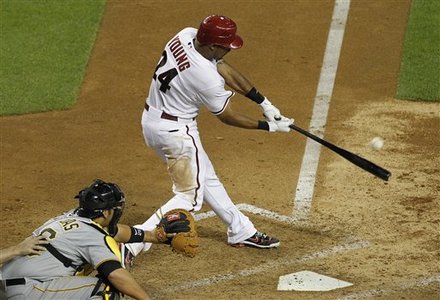 After locking up their first road win of the season on Sunday against the San Francisco Giants, the baseball optimist might believe that this would initiate a strong Pirates’ finish to their current west coast road trip.

That certainly wasn’t the case tonight, as starter Erik Bedard struggled with his control, the bullpen failed to keep the game close, and the offense was once again lacking any type of run production.  The Bucs lost to the Arizona Diamondbacks tonight at Chase Field, 5-1.

The theme of this young Pirates’ season thus far has been strong starting pitching and struggling offensive production.  Bedard, in his third start of the season, had control problems throughout his five innings of work tonight.  He walked four batters, giving up two runs on three hits.  Still, as we’ve said numerous times throughout this past week, he did enough to keep the Pirates in the ballgame early.  In his three starts this season, Bedard has an impressive 2.65 ERA.

The bullpen has been solid so far this year as well, but tonight painted a different picture.  Evan Meek and Chris Resop relieved Bedard in innings 6-8, and let the game get away from them.  Meek surrendered two runs on two hits in his inning of work, while Resop gave up a run on three hits in his two innings.  When Bedard left the game, it was a one-run ballgame, and only a few innings later, the Diamondbacks owned a commanding 5-1 lead, which, as we all know, was more than enough against a struggling offense.

Actually, at this point, struggling offense is a huge understatement when describing the Pirates.  As annoying as it is to read, it’s more annoying to be writing these types of statistics.  But after tonight’s one run (on six hits), the Bucs have only mustered a total of 19 runs this entire season.  That’s less than two runs per game.

The usual suspects, including Jose Tabata and Clint Barmes, were held hitless again, while Pedro Alvarez, despite sitting this one out, did make a pinch-hitting appearance in the sixth inning.  He grounded out to second.

Andrew McCutchen and Neil Walker are the only two dangerous bats in the lineup at this point.  Tabata is dreadful right now at the plate, and it’s obvious how frustrated he’s becoming each at-bat.  Alex Presley had a bunt-single, while Casey McGehee and Rod Barajas added a hit a piece.

This offense is becoming a serious concern.  Each night, we wait for the offense to “bust out,” and each night we’re left disappointed.  Things need to turn around for this offense immediately or this month of April could get away from the Buccos fast.

Bedard suffered his third loss of the season, again, despite a 2.65 ERA.  Joe Saunders earned the win forArizona, whose offense was led by Chris Young’s three hit, two RBI performance.

The Pirates and Diamondbacks are back at it tomorrow night at Chase Field.  Jeff Karstens will try to build upon his solid start to the 2012 season.  First pitch is once again slated for 9:40pm.