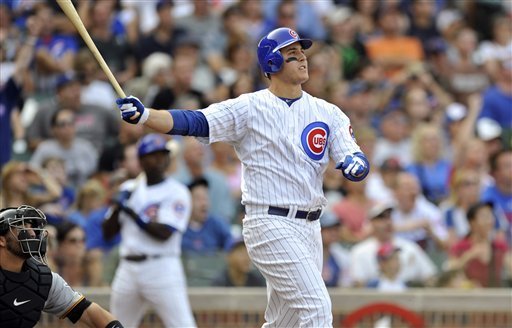 A day after closer Joel Hanrahan almost blew a save opportunity, the bullpen was a mess today in a 13-9 defeat.  The Pittsburgh Pirates had leads of 5 and 4 runs, but neither lead was safe against the Chicago Cubs today.

The Buccos were up 6-1 in the bottom of the fifth when the first blown lead occurred.  Starter Jeff Locke would give up a solo homer and two run shot before being lifted with a runner on first and one out.  Chris Resop would replace him and allow the runner he inherited to score on a single, before getting out of the inning.

Pittsburgh was able to answer in the top part of the sixth on a three run home run by Pedro Alvarez.  With a 9-5 lead things were looking pretty good for the Pirates with the way the offense was hitting the ball.  That would all change in the bottom part of the fifth.  Rick van den Hurk replaced Resop and would give up two hits and a walk before Jared Hughes replaced him.  Hughes then gave up an RBI single to Darwin Barney.  That is when the implosion took place.  With the bases loaded Anthony Rizzo would blast a grand slam to put the Cubbies ahead for good.

The Buccos offense had a chance to answer when Starling Marte led off the seventh with a triple, but as we have seen for the past six weeks that would go to waste.  Neil Walker would line out to second, Andrew McCutchen would strikeout looking, and after a Garrett Jones walk, Marte would be caught stealing home on a delayed double steal.

Chicago added two runs in the eighth inning to complete a huge come from behind win.  Not much to say at this point, it looks like the Pirates are finding ways to lose everyday and are once again in the middle of a huge late season collapse for the second time in as many seasons.  Heads will sure to be rolling once the offseason begins.  Hopefully when they do, it is because of upgrades, not just for the effect of shaking things up.  The final game against the Cubs of the 2012 season takes place tomorrow at 8:05.