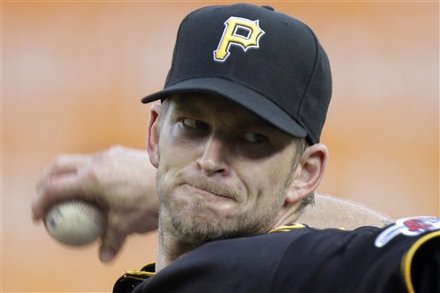 This weekend’s series at PNC Park features two struggling N.L. Central teams looking to get back on the right track against one another.  Both the Pirates and the Chicago Cubs have been regrettably dreadful on offense, and for Chicago, they entered tonight’s game looking to snap their nine-game losing streak.

While the offensive production was once again horrendous for both teams, the Pirates did JUST enough at the plate to muster a run in the second inning, and the pitching staff dominated the Cubs’ hitters throughout the night.  The Pirates beat the Cubs in the first game of this three-game series, 1-0.

A.J. Burnett pitched well tonight, but due to pitch count and a few minor jams, lasted just 5.1 innings.  He gave up six hits and walked two batters, but he did strike out six Cubs’ batters, and many of those K’s came at times when Chicago had runners in scoring position.  With his scoreless start tonight, Burnett lowered his ERA to 4.19 for the season.  Just imagine where his season line would be if it weren’t for that outing against the Cardinals.  Wow.

The bullpen, as it’s been all season, was phenomenal tonight, tossing nearly four innings of scoreless baseball.  Jared Hughes cleaned up the sixth inning for Burnett, and in doing so, notched his 10th straight scoreless appearance.  Jason Grilli and Juan Cruz set the Cubs down in the seventh and eighth innings, with four of the six outs resulting in strikeouts.  Joel Hanrahan, after getting himself into trouble in the ninth inning with two runners on and one out, struck out David DeJesus and Starlin Castro to end the game and earned his 11th save of the season.

Unfortunately, the offensive struggles for the Pirates continued tonight.  Rod Barajas led the way with two hits, including an RBI single in the second inning, scoring Pedro Alvarez.  Josh Harrison extended his current hitting streak to ten games, while four other Buccos added a hit a piece, including Neil Walker, who hammered a double off the wall in the eighth.  Ryan Dempster was masterful against the Bucs, giving up only one earned run on seven hits through 7.1 innings.

This game was all about the pitching (on both sides) and for the Cubs, it was about missed opportunities at the plate. Chicagocertainly had their chances against the Bucs tonight, but, as struggling teams do, they couldn’t take advantage.  The Cubbies left 11 runners on base tonight, and as a team, they were 0-12 with runners in scoring position.

The Pirates need to win this series against the Cubs, no question about it, and it’s always better to win the first game.  The offensive struggles continue, but so does the impressive pitching from top to bottom.  These divisional games are vital to a successful season, and the Bucs need to win games against teams like Chicago.  Is the offense ever going to wake up?  Who knows, but for now, it’s uplifting to see the Pirates be able to win some of these games when the offense can barely muster a run or two on these nights.

Matt Hague was in the starting lineup tonight after being recalled from Triple A Indianapolis, taking Nate McLouth’s spot on the Bucs’ Major League roster.

Don’t get me wrong, this was a good win for the Pirates.  BUT the offense needs to get better immediately.  Will they be able to pick it up tomorrow?  Let’s hope so.  The Pirates will face Paul Maholm on Saturday for the first time this season.  The struggling Kevin Correia will take the mound for Pittsburgh.

Let’s be sure not to take this pitching staff for granted though.  From the starters to the bullpen to Hanrahan, this staff is doing something VERY special this year.  Let’s get’em some run support offense!