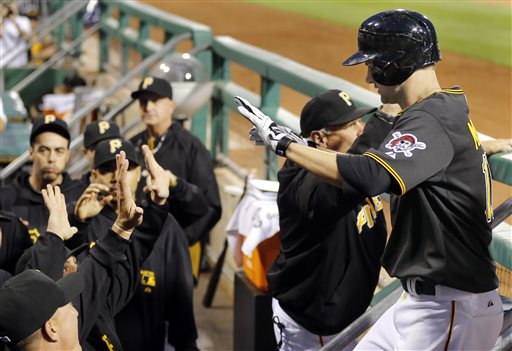 The Pittsburgh Pirates returned to PNC Park Friday night to begin a three game series with the Washington Nationals.  The Pirates were coming off of a successful road trip, while the Nationals have been a little slow out of the gate this season after many people picked them to be a World Series favorite.

Pittsburgh knew that it was important to get off to a good start and not give Washington any momentum that they could build upon for later in the weekend.  A.J. Burnett did a fine job at keeping the Nats bats quiet for the majority of his seven innings of work.  Burnett captured his third win of the year by allowing one run on five hits with nine strikeouts to only one walk.

The bullpen had his back one again tonight as Mark Melancon picked up his eleventh hold of the year on one inning of work, allowing one hit and picking up two K’s.  Speaking of K’s, that is all Jason Grilli did on his way to save number twelve on the year.  Grilli faced only three batters and struck out the side.

The Buccos jumped out to an early lead, when Andrew McCutchen hit a solo home run in the first inning.  Cutch had a very good night going 3-4. It appears that he has broken out of the early season slump.  The game winning long ball came in the fifth off the bat of Jordy Mercer.  Mercer, who was called up today when Neil Walker was placed on the 15-day DL, hit a two run homer that put Pittsburgh up for good 3-1.

The other roster move of the day saw the Pirates add relief pitcher Jose Conteras to the bullpen.  Because of that move, Jared Hughes was optioned to Indianapolis.

This series will continue tomorrow afternoon at 4:05pm.  Jeff Locke will look to make it three games in a row with a good outing and he will need to with the Nats throwing Stephen Strasburg.