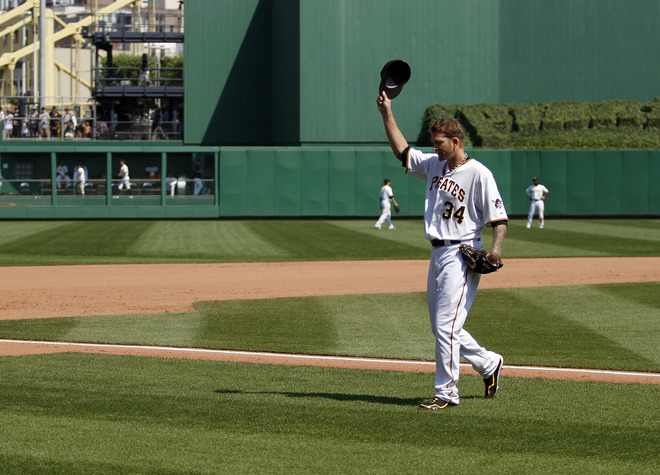 A.J. Burnett is quickly becoming one of the best pitchers in the National League.  Following his performance this afternoon at PNC Park, he is now 6-2 on the season, and, outside of his outing at Busch Stadium against the St. Louis Cardinals, has dominated opposing offenses.  Today, he gave up two runs on five hits through 7.1 innings, while carrying a no-hitter into the sixth inning.

Tony Watson and Juan Cruz combined to get the final two outs of the eighth inning, keeping the Royals just one run shy of tying the game.  Jason Grilli earned his first save of the season, but not without dramatics.  After allowing a base hit and issuing a walk, he struck out the final two batters of the game, to propel the Pirates to a thee-game series sweep this weekend at PNC Park.

As for the offense, they didn’t score droves of runs, but they scored enough, as they’ve done periodically this year, to win games.  Andrew McCutchen had struggled this series during the first pair of games, but today, he was the hitting star that he’s been all year.  Cutch drove in all three of the Pirates’ runs today, including an RBI double in the first inning and a two-run homerun in the third.  The rest of the Bucs only managed three hits, including one from Alex Presley, Neil Walker, and Garrett Jones, but they made them count, earning their fourth consecutive victory and a home sweep in Interleague Play.

This was a huge game (and series) for the Pirates to win.  The Royals are certainly not one of the marquis teams in their division (they proved that this weekend), but it was a series in which the Pirate were the better team on paper, and they proved it on the field.  These are the types of games and series that they need to win.  It was a quick home stand, but by winning the only three games at PNC Park this time around, they continue to build momentum, which they’ll need as they head out on the road against the Baltimore Orioles and Cleveland Indians.

After a day off tomorrow, they’ll be back in action for the start of a six-game road trip against the Orioles and Indians. Pittsburghhas four more Interleague Play series this season.  So far, they are 4-2 against the American League.