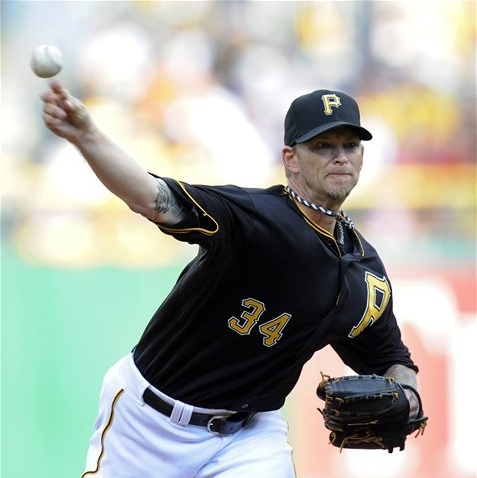 The Pirates just keep finding ways to win games.  Tonight, it was a familiar method of winning:  starting pitching.  A.J. Burnett won his seventh straight game, while the Pirates got off to a strong start offensively and held on to knock off the Detroit Tigers, 4-1 at PNC Park.

Burnett has been the Bucs’ ace all season, and he continued that trend tonight, tossing six scoreless inning, only allowing two hits, dropping his ERA to 3.24 for the season.  He did issue three walks, but got himself out of a tight jam in the sixth inning.  A.J. is now 8-2 on the season.

The bullpen came in and did its job, as it always does, to keep the Pirates in the lead.  Jared Hughes did give up a run in the seventh inning, but Tony Watson, Jason Grilli, and Joel Hanrahan set the Tigers down in the late innings to seal the deal for the home team.  For the Hammer, it was his 18th save of the season, setting the Tigers down in order.

Pittsburgh’s offense continued to hit the ball well tonight.  As a team, the Bucs tallied nine hits, including three from Andrew McCutchen.  Rod Barajas added a pair of singles, while Alex Presley, Neil Walker, Matt Hague, and Pedro Alvarez had a hit each.

The Pirates jumped out to an early lead in the first inning.  After Presley led off the game with a double,Walker’s RBI single gave the Bucs an early 1-0 lead.  Garrett Jones’ ground out double play scored Walker who had moved to third base.  They added two more runs the very next inning on a fielding error, which scored Alvarez and Barajas.  That would be more than enough for the Bucs’ pitching staff, who kept the Tigers’ hitters in check throughout the game.

This was a big win for the Pirates tonight in front of a huge crowd at PNC Park.  As we all know, winning the first game of a series greatly increases the chances to winning the series, and the Bucs did just that tonight.  They are now five games over .500, and will look to secure the series victory tomorrow against the Tigers.  Brad Lincoln will get the start at special first pitch of 4:05pm.