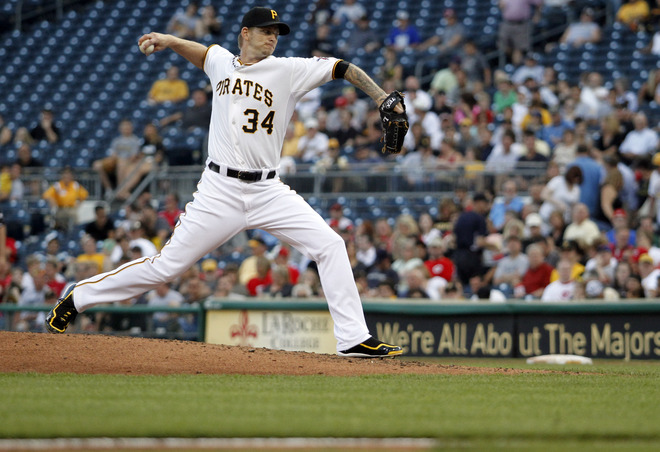 It was another close game for the Pittsburgh Pirates tonight and for five innings it looked like another very good pitching performance by A.J. Burnett would go to waste.  Luckily, Matt Hague drove in two runs during the bottom part of the sixth and the bullpen was lights out in a 2-1 victory over the Cincinnati Reds.

The Reds got on the board early with a run in the first inning on a sacrifice fly by Brandon Phillips.  That would be the only run they would score, all be it unearned due to an error that occurred on Pedro Alvarez.  Burnett shut down theCincinnati offense over the course of seven innings giving up two hits and striking out three while walking two batters.  His ERA is now down to 3.60 and his third straight win gives him 4-2 record on the year.  So far this has been a great pick up for the Buccos.

The offense looked rough tonight, which is no surprise when facing Johnny Cueto.  Cueto would go seven innings allowing five hits while striking out five and walking four.  He did give up two earned runs though in the sixth inning.  Those two runs came off the bat of Hague, who drove the ball into the right-centerfield gap to score Neil Walker and Garrett Jones.  Those two runs along with Jason Grilli and Joel Hanrahan pitching scoreless eighth and ninth innings capped the victory forPittsburgh.

This was a big win tonight for the Pirates.  They are back at .500, sit three games out of first place, and finished their homestand with a 6-3 record.  The Buccos have tomorrow off, before their first series of the season against the Milwaukee Brewers.  We all knowPittsburgh has had their share of demons over the years inMilwaukee, but with the Brew Crew down, now is the time to exorcise them.