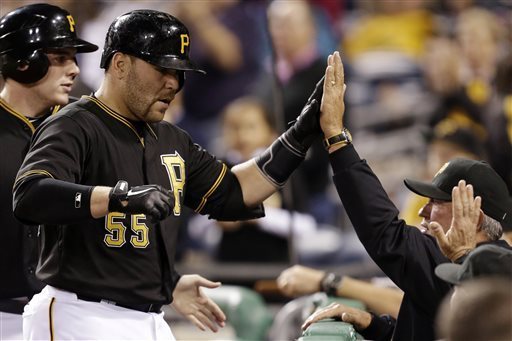 After last night’s collapse in the ninth inning, Pittsburgh Pirates fans were in full panic mode.  It was yet another example of the team letting a very winnable game slip away, something that has unfortunately become quite common as of late.  And after last night’s loss, there was no question that the mental toughness of this team would be tested tonight at PNC Park.  A.J. Burnett and the Bucs responded, though, as they’ve done all year, beating the Cincinnati Reds, 4-2, setting up the rubber match of the series tomorrow afternoon.

Burnett won his ninth game of the season, out-dueling Reds’ starter Homer Bailey, going seven innings while giving up two runs on four hits with three walks and twelve strikeouts.  Bryan Morris and Justin Wilson combined to toss a scoreless eighth, and Jason Grilli tallied his first save since July 21st and his 31st of the season.

The Pirates fell behind early on a Ryan Ludwick single to shallow left field, scoring Brandon Phillips and giving the Reds a 1-0 lead in the top of the first.  Zack Cozart followed with a solo homerun to left field to put Cincy in front, 2-0.

Russell Martin answered in the bottom of the second with a two-run homer to deep left, scoring Pedro Alvarez.  Marlon Byrd’s sacrifice fly in the sixth and Alvarez’s two-out single gave the Bucs a 4-2 lead, which was more than enough with the way Burnett and the bullpen were throwing the ball tonight.

Martin and Jose Tabata led the Bucs with two hits each.  This was certainly not an offensive outburst by any means, but they did enough with the bats to secure a much needed victory against the feisty Reds.

The Pirates and Reds will match up tomorrow afternoon for the final home regular season game and the rubber match of the series.  It’s  a HUGE game, no doubt about it, and Jeff Locke & Co. need to come ready to win this one.  The crowd will be ready.